INGESTED to release The Architect Of Extinction

INGESTED, hailing from Manchester and taking not one prisoner as they go. They’re brutal, no other way to put it.

Taking the scene by storm in 2009, with their debut album, Surpassing The Boundaries Of Human Suffering, with tracks such as ‘Skinned and Fucked‘, ‘Intercranial Semen Injection‘ and ‘Cremated Existence’. Established themselves as masters of fuckery and UK slam. They followed this masterpiece of slaughter with their album The Surreption in 2011 which is one of the best flowing albums ever created. It is also one of the heaviest albums I have ever heard to date. It opened my eyes to these beautiful creatures of doom. Imagine inserting a buzz saw into your skull and letting it go, but enjoying it.

After that all was quiet and the world was not right. Two long years to 2013 and they released their incredible EP, Revered By No One, Feared By All, HO-LY SHIT. The opening track ‘Titanomachy’, rising from the ashes of a not so decimated legacy! Seriously this thing fucking kills, I’ve seen people die listening to it. Too much for them, absolutely tragic…examples of human beings. This 4 track EP blew the doors off my house. Track 4, ‘Endgame’, damn. Frontman Jason Evans knows how to guttural, knows how to scream, how to squeal, how to write and how to destroy.

So there I was thinking all was going to be quiet for a long ass time again and this cunt drops out of the ether and destroys my home.

The Divine Right Of Kings, this, is on an entire new level to anything they’ve written. It also acted as the prelude to destruction, a new album. The band announced that they would be releasing a new album in January 2015, titled The Architect of Destruction.

Vocalist, Jason Evans commented on the announcement of the release saying: “It’s took us three albums and two EP’s to find our sound, our identity as a band. This album is Ingested in it’s purest form; nihilistic, slamming death metal. Every lyric, guitar riff and drum beat on this album is delivered with utter sincerity, we fucking mean it this time. This is the album we have always wanted to create, this is THE ARCHITECT OF EXTINCTION. Once again we enlisted the amazing art talents of Toshihiro Egawa, who we worked with on our debut album Surpassing the Boundaries of Human Suffering, to produce yet another stunning, brutal masterpiece to compliment the audio assault we’ve captured on disc. 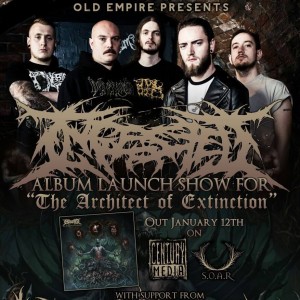 This album was mixed by Christian Donaldson (Beneath the Massacre, The Last Felony and Cryptopsy) and features guest appearances by Julian Kersey (Aegaeon), Taylor Wientjes (@The The Kennedy Veil), James Schuster (Eighty Thousand Dead / Delusional Parasitosis) and Alex Terible ( Slaughter To Prevail ) who have contributed their very own brand of brutality to this record. This is our most definitive work to date and we can’t wait to unleash it on the world.”

Not only is the artwork insanely brutalitastic, the guest appearances. To anyone that knows, Julian Kersey has some of the lowest rumbling lows known to man, and Alex Teribble, made famous by his vocal cover of Endgame, his incredibly brutal raw vocals and his obvious Russian-ness.

This album is gonna blow your socks, pants, boxers, tops, bras off, whatever it is you wear when you do the hoovering on a Sunday, ITS GONE BABY! GONE.
THE ARCHITECT OF DESTRUCTION is set to be released on January 12th 2015 under Century Media Records!

You can pre-order it here : www.cmdistro.de/Item/Ingested_-_The_Architect_Of_Extinction/2159

In the meantime, here is the track listing for the album:

1. The Divine Right Of Kings

4. The Heirs To Mankind’s Atrocities

The fact they have released track 1 first, says to me, it aint got shit on the rest. Prepare yourselves, the heavies are coming.