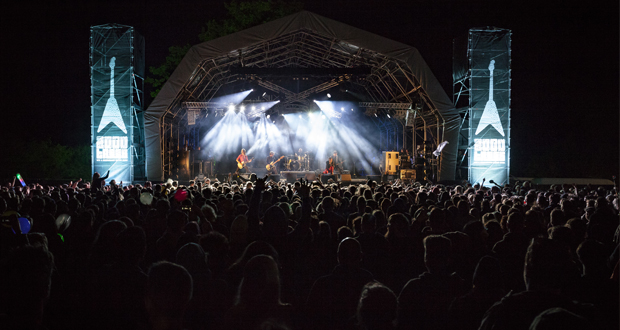 “You only have 52 weekends a year – make 7-9th July count”. Alright 2000 Trees, we definitely did just that. In a world of big corporate festivals, it’s incredibly exciting to see an independent fest organised by a group of mates hit its tenth anniversary – particularly with the likes of Hevy falling by the wayside in the cutthroat UK festival arena. In place of flat, warm and dressed-up Tesco pizza for eight quid, 2000 Trees offers wares from local traders, quality eats, and, most importantly, some of the best music the summer season has to offer.

We arrived late on the Thursday in time to catch perhaps one of the worst-kept ‘secret’ sets we’ve heard of; The Axiom stage was full to the brim for one man, his guitar and some generation-defining folk-punk tunes. Yep, the one and only Frank Turner made a stop-off in the Cotswolds to give us all a good old singalong. Playing a set focused on ‘England Keep My Bones’, it says a lot about Turner’s ability and work ethic that he can completely captivate an audience with nothing more than some darn good music and an enigmatic, honest-as-hell performance.

After watching The Bronx tear up The Cave, it was time to take a walk around the campsite. One of the most wonderful things about 2000 Trees is the amount of musicians and heavily involved fans that attend – it’s almost impossible to walk past a line of tents without hearing the strains of an acoustic guitar and some vocals. The ‘busk stops’ around the site allow punters the chance to basically ‘play the festival’. And named camps (Turner, Marwood, Reuben…) often play host to some of the more recognisable names from the British underground music scene, with no amplification set ups – just instruments, voices and a willing audience.

For those just arriving for the weekend, Trash Boat made a perfect stop-off for a first band – a short but impressive set, their slightly hardcore-influenced pop-punk definitely worked perfectly in The Cave.

Moose Blood are completely blowing up both inside and beyond the ‘scene’ at the moment, with Radio 1 airplay and an already sold-out gig at London’s Koko. In October. For their new album tour. An album which isn’t even out yet. Which goes a way to explain why their acoustic set, delivered by vocalist Eddy Brewerton, had The Forest completely filled. Although less powerful than their later full-band set, songs such as ‘Cherry’ and ‘Bukowski‘ were well received by the crowd (or at least, by those close enough that they were able to hear).

Wrexham lads Neck Deep provided a mid-afternoon pop-punk party on the main stage, immediately hitting the audience with energy and firecracker tunes. A sped-up, full-band version of ballad ‘December‘ was a fun surprise, and the haunting ‘Serpents‘ demonstrates that although they’re current kings of the UK pop-punk scene, they’re not afraid to delve into further influences for their sound. Although sometimes hit and miss in an outdoor setting, this time round, they definitely hit all the right spots.

One band that does consistently deliver in a live setting is Mallory Knox. Polished and confident, these boys know how to ‘bring it’ on a festival stage. Whether it’s the singalong, arms-in-the-air vibes of the massive ‘Lighthouse’ or the powerful and solid-riffed ‘Death Rattle’, their well-constructed delivery falls just enough short of over-produced to still feel authentic. Twin Atlantic brought Friday to a close with their heavily-accented, Scottish, radio-friendly alt-rock anthems, ending on their best known track, ‘Free’.

If there were any band who could step up and complete knocking out any residual hangovers, it was always going to be Nottingham noisemakers Heck. Even for those who’d mistakenly describe their heavy, manic style as ‘just noise’ (it’s actually impressively technical), their set was an incredible spectacle to behold. With a seeming inability to stay on the actual stage for more than about a third of a song, their set was delivered from the middle of the crowd, the centre of a wall of death, the sound stage and a speaker stand, to name a few places. Chaotic and raucous, the band formerly known as Baby Godzilla definitely aren’t letting up any time soon.

In terms of up-and-coming bands that are majorly deserving of your time, Blood Youth are definitely up there with the best. Following in the melodic hardcore footsteps of bands such as Beartooth, Kaya Tarsus’s aggressive vocals pair perfectly with head-banging riffs – most definitely ones to watch.

On the subject of bands to watch, Creeper are definitely onto something huge at the moment. You’ve probably heard of them. If you miss old-school AFI, they might go quite the way to fix your craving with their horror-punk rock anthems. Enigmatic frontman Will Gould has the vocals of a seasoned classic-rock star with the heart of an old-school punk. Hearing a huge crowd bellowing along to one of their already-iconic tracks, ‘Misery‘, was a pretty special moment – definitely even more moving live than on record. With keyboardist/backing vocalist Hannah adding an atmospheric extra depth to their sound, this is ‘new punk’ at its finest, and it’s not a stretch to imagine Creeper easily sliding higher up festival bills in years very soon to come.

Nostalgic singalongs to the likes of ‘Girl From Mars‘ and ‘Shining Light‘ were lapped up by the crowd during Ash’s set. Although newer track ‘Cocoon‘ wasn’t as well received by the audience, it showcased the trio’s ability to still be making solid guitar music years after being all over your noughties compilation albums. Vocalist Tim Wheeler seemed to have barely aged, and gave a jubilant and naturally magnetic performance.

2000 Trees attendees have a lot of love for Jamie Lenman, and you’ll probably see more Reuben tees sported over this one weekend than you will the rest of the year put together. Performing twice over the weekend, his second set in The Axiom drew a heavy crowd, who were treated to a mixture of tracks from Muscle Memory, some Reuben classics and even a Frank Turner cover. Lenman covering Turner? Pretty much the most ‘Trees’ moment of the weekend. As well as his solo tracks, he also made the set a bit of a collaborative effort by bringing out Arcane Roots vocalist Andrew Groves for ‘Little Lives‘, and The St Pierre Snake Invasion to give ‘A Day In The Life‘ it’s rightful acapella barbershop vibe.

If Refused could be described fitting within a ‘punk’ box, then their box definitely has a lot of holes in, and probably lots of other little boxes inside – this is a band that aren’t afraid to push their sound.

Featuring electronica elements combined with heavy guitars, it’s clear that their sound has had a major impact on plenty of modern bands across all spectrums – from the straight-up punk scene to the likes of Enter Shikari, who regularly experiment with electronic and heavy sounds together. Vocalist Dennis Lyxzén completely worked the stage, in an eye-catching red suit and dance moves that made our knees hurt just watching them.

Before breaking into final track ‘New Noise‘, Lyxzén gave an impassioned speech about women in music, particularly referencing the lack of women on the 2000 Trees bill. An interesting topic, although perhaps something the crowd felt slightly alienated by at this late point in the weekend, it was definitely on the lips of the crowd as they headed back to camp. But the overwhelming conversation was that Refused have still definitely got it, and their powerful set makes their return to the music world all the more welcome.

With unique opportunities to see bigger bands alongside new and underground British music, 2000 Trees is a true community with an unrivalled atmosphere. A festival for those who just love to listen to music, their tenth anniversary was no different in offering a brilliant small-festival experience.