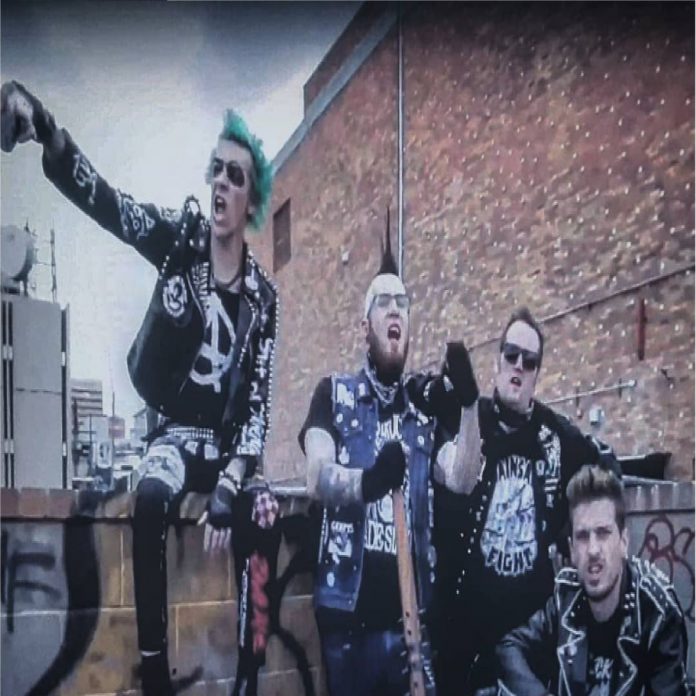 In 2018, guitarist Jay met singer Slam in Las Vegas and had a bit of a discussion about punk rock and the various bands that have populated the scene. Soon thereafter they found bass player Gogo and drummer Cody and formed a band under the moniker Gob Patrol.

After recording their first demo, Gob Patrol hit the road playing shows to large crowds in California, Utah, Arizona, and raging away out in Las Vegas where they’re based.

The concept was to develop music based on the influence and sound of their favourite 80s punk bands, and to keep that sound alive in a growing scene. Writing guitar-driven songs inspired by bands such as Black Flag, GBH, and The Germs.

Now signed to Riot Records, there’s a full album of punk anthems promised soon, but they wanted to follow the punk rock tradition and release singles to begin with.

They debuted with ‘Anarchy’ a shouty little number that takes you back to this side of the Atlantic, and the streets of London where punk rock officially began. You can stream/buy ‘Anarchy’ here and pogo along to the video right her at RAMzine.

Gob Patrol followed that with ‘Sin City’, wherein thunderous guitar and drum tones, and high-energy vocals can be heard. You can purchase the single here and watch the video to it here too.

Gob Patrol has now released ‘Bad Vibes’, an ode to one of their aforementioned punk influences, Black Flag. This latest single describes that feeling you get when you’re in the presence of someone who terrifies or confuses you, giving you a bad vibe. Hard bass and buzz-sawing guitar riffs accent the crashing cymbals and minimal beats, with repetitive lyrics telling a story of fear and uneasiness. You can get the single here.

Gob Patrol has also gathered these singles as part of their New Spit EP, that you can stream/buy New Spit here.