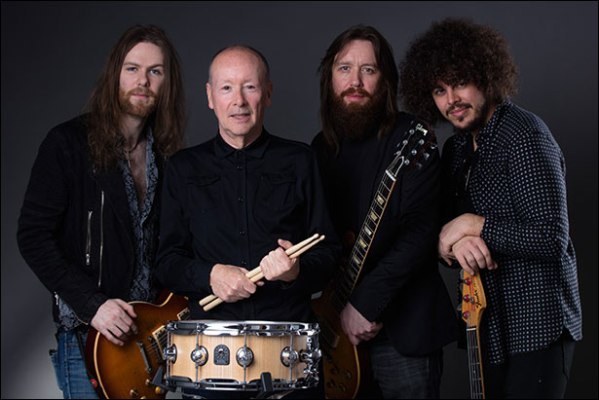 Legendary Thin Lizzy drummer Brian Downey will commemorate the 40th anniversary of the recording of their classic Live And Dangerous album with a rare concert performance in London on Friday 24th November at on Nells Jazz & Blues.

Thin Lizzy’s Live And Dangerous is routinely listed as one of the greatest live rock and roll albums of all time in assorted distinguished polls, featuring as it did the classic Lynott, Downey, Gorham and Robertson line-up. While the album was released in 1978 the recordings were made at London’s Hammersmith Odeon during the 1977 UK tour and Toronto’s Seneca College the year before, thus why Downey is performing this particular concert now.

“After the Thin Lizzy reunion shows finished in 2013, I was asked to join, what turned out to be Black Star Riders, but it just didn’t feel right for me.  In January 2016, following an appearance at the Vibe For Philo in Dublin, I approached Brian Grace and that’s when we discussed getting a band together,” revealed Downey of the guitarist best known for playing for The Commitments’ Andrew Strong.

“After a few rehearsals, Brian suggested that we rehearse with Matt Wilson (lead vocals, bass) and Phil Edgar (guitar), both of whom had been in a band called The Low Riders (their name was taken from a lyric from the Thin Lizzy song ‘Johnny The Fox’). In January 2017, we jammed together at the Vibe For Philo, and it went so well, that we decided to form Brian Downey’s Alive And Dangerous and make it a full time proposition.”

Tickets for Brian Downey’s Alive And Dangerous performing at Nells Jazz & Blues can be purchased from www.seetickets.com and the 24 Hour Box Office on 0871 220 0260.