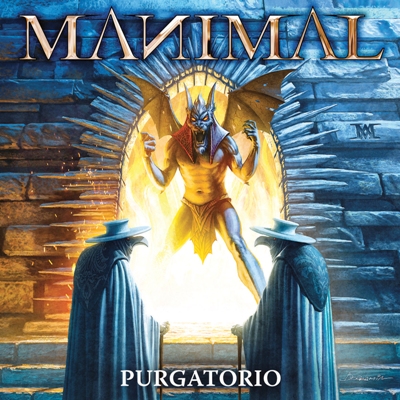 ‘Black Plague‘ is the first single to be released by Manimal from their new album Purgatorio that’s out on 7th September through AFM Records.

“Just like our previous two albums, we produced this one ourselves. Mainly because we like to have full control of the production. We’re control freaks to the bone and the thought of putting our creations into the hands of an external producer simply scares us.”

However, they also had some additional outside assistance. Drums were recorded by Jakob Herrmann (Anthrax, Europe, Machine Head, Evergrey) at Top Floor Studios, the album was mastered by Tony Lindgren at Jens Bogren`s Fascination Street Studios, and the cover artwork was designed by Claudio Bergamin (Judas Priest).

“Our goal has always been to write songs that we love and believe in. The challenge is to make a song with strong hooks without being too predictable. It`s just a bonus when we realise that people around the world seem to have the same good taste in music that we have,” joked Nyman, whose vocals are obviously Inspired by the likes of Rob Halford, Geoff Tate and Michael Kiske.

The vocalist also explained why the Swedish lads chose am Italian title: “First, it’s the title of one of the strongest songs of the album. Second, it’s a powerful word that fits perfectly as the title of a metal album in general and this recording in particular.

“For me, it reflects the state of mankind and the world today – the general, ongoing decay which we seem to lack the ability to stop.

“Many of the lyrics on the album circle around that kind of theme. Purgatorio is also the original title of the second part of great Dante Alighieri’s masterpiece The Divine Comedy. It’s not the first time that we’ve found inspiration in that specific work of literature.”

With Stenroo’s hooks and licks providing the foundation for Manimal’s songs, lyrics were supplied by Nyman and Holmqvist, while Boufadene took charge of mixing and subsequently producing the band’s videos – and the one for ‘Black Plague‘ you can watch and listen to right here at Ramzine.

Share
Facebook
Twitter
Pinterest
Linkedin
Email
Print
Mix
Previous articleDevilDriver “If it’s not volatile and visceral, its not metal” Bloodstock 2018 Interview
Next articlePower Trip Continue Their Rise To Greatness With A Chaotic Headline Show In London