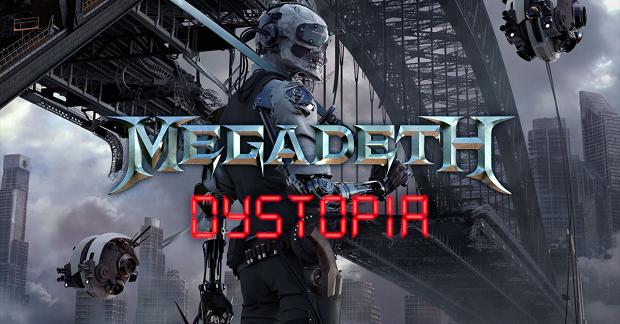 Dave Mustaine and David Ellefson, the constant forces behind Megadeth have welcomed former Angra guitarist Kiko Loureiro, and drumming mastermind Chris Adler of Lamb of God fame into the fold for this release. Recorded in Nashville, TN, and mixed by Josh Wilbur, this album has stoked the creative fires that are ready to be unleashed upon release.

‘Dystopia‘ Consists of 11 brand new tracks, the first of which has been released, “Fatal Illusion”. Coming out on CD, LP and digital download, this album brings the ever familiar presence Dave Mustaine is known for, raspy vocals mixed with the musical wizardry he has been known for since first hitting the scene, this is Megadeth‘s rise from the ashes.

Check out the track below:

Thirty years on, and still pushing boundaries, Megadeth are one of the main architects behind thrash metal, recently earning he accolade of Greatest Thrash Metal Debut Album of All Time from VH1 for ‘Killing Is My Business…and Business Is Good!’ With albums sales worldwide surpassing 38 million, 11 Grammy® nominations as well as 5 consecutive platinum albums, they are far from done with business yet.

1. The Threat Is Real

5. Bullet To The Brain

Keep up with all things Megadeth via these links: