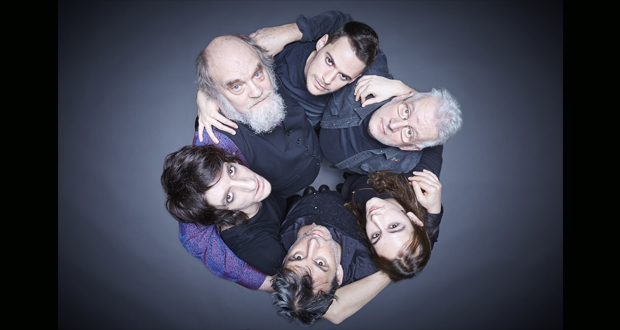 Seminal prog act The Enid release their new album Dust  on 1st April – This is the third in a trilogy that started with 2010’s Jouney’s End and was followed by 2012’s Invicta.

Dust is the band’s 14th studio record and released on the band’s own Operation Seraphim label. It features the following tracks are as follows: ‘Born in the Fire’,  ‘Someone Shall Rise’, ‘Monsters’, ‘1000 Stars’, ‘When the World is Full’, ‘Trophy’ and ‘Heavy Hearts’. It sees the band distance themselves from all preconceptions associated with the early instrumental phase of their career.

“Dust is the last in the Journey’s End trilogy, telling the story of the band’s generational voyage from the past into the future’”explained The Enid’s founder Robert John Godfrey. “Needless to say this has been very much an evolutionary tale with many surprises along the way. This is by far the best of these albums.”

The Enid debuted with In The Region of the Summer Stars back in 1976 just as the weekly rock press of the times was fixating on the burgeoning punk scene. The Enid however took quite a few people by surprise, playing classical music without irony and camp renditions of rock classic ‘Wild Thing’ between their instrumental symphonic rock (adding voices with 1983’s Something Wicked This Way Comes, the first album ever to be completely crowd-funded through their fan club).

The band’s line-up has changed over the years, but ever-present has been Robert John Godfrey, previously musical director for Barclay James Harvest from 1968 to 1971, and whom the late Radio 1 dj described as “One of the greatest composers Great Britain has ever produced”. Godfrey was presented with the Visionary Award at the Progressive Music Awards 2014 and was announced as one of the top 100 composers of all time in the Classic FM Hall of Fame.

With the addition of vocalist Joe Payne in 2011, The Enid took a new direction combining Godfrey’s love for classical music with Payne’s taste for groundbreaking pop artists such as David Bowie, Kate Bush and Peter Gabriel. Payne has been described by the prog community as the next Freddie Mercury, boasting a five octave range; he was crowned Best Male Vocalist in the 2015’ Prog magazine reader’s poll, where The Enid also scooped Band of the Year and Godfrey made Best Keyboardist. The Bridge Show, where they pushed boundaries in their use of visual art and political and social context, was also nominated for Best Live Event at the 2015 Prog Awards.

The Enid are currently on tour across the UK through to early April when Dust is released and as with The Bridge Show it is an eccentric, ambitious audio-visual production directed by TV illusionist Simon Drake (Secret Cabaret), who previously worked with Kate Bush on her Tour of Life.

Full details regarding their current tour and how to get hold of Dust can be found at The Enid’s website.