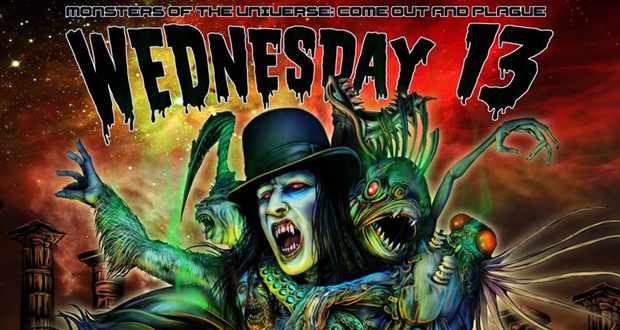 On October 30th the Murderdolls front man will be playing material from his latest album ‘Monsters Of The Universe: Come Out And Plague’  as well as other tracks.

On Halloween night, October 31st, Wednesday will be playing a special set celebrating the 10 year anniversary of his debut solo album ‘Transylvania 90210’- played in it’s entirety.

The show has been billed as ‘Two nights of terror’ and looks to be as exciting as his ‘Monsters Of The Universe’ tour earlier this year.

The gothic overlord had this to say:

Calling all London corpses!!! I’m so excited to be playing Halloween in London again and this time we’re making it an event; a ‘weekend of horrors’! Two nights, two different shows, live at The Garage. On Halloween night, we will be celebrating the 10th Anniversary of the ‘Transylvania 90210’ album, with a special set playing that album in its entirety. If these shows are anything like our 2012 Halloween show in London, it’ll be a night to remember.  So get ready UK, the Monsters are coming!”

Tickets are available from the usual outlets.