Aaron Buchanan and the Cult Classics at Download Festival 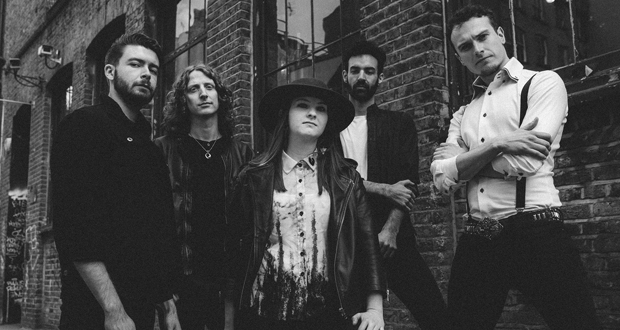 We talked about ‘The Man with Stars on His Knees’ from Russian mythology, how that influenced their debut album and what it meant to them. Aaron talks about the personal turmoil and passion that went into making the album and how it’s essentially therapeutic because it says exactly what he wanted towards previous band members and addresses the issues that upset him. I know we will certainly be listening to it!
We also discuss how Laurie ended up forming a band with her brother. Aaron admits the Laurie is one of the best guitarists he knows. And it seems one dark and stormy night, Laurie was listening to Aaron’s demo and like a great sister… told him the guitars were rubbish! Laurie then re-recorded guitars for Aaron and it magically fell into place. Why look for a new guitarist when an incredible one lived under the same roof! They ended up going to ‘Tour Bootcamp’ otherwise known as ‘The Studio’ to record the new guitars. Spending a week without hot water, Aaron knew then…his sister was the women for the job and could brave any tour the world could throw at her!
Watch the full interview here:
[divider]
Check out Aaron Buchanan and the Cult Classics BRAND NEW video ‘Dancin’ Down Below’ :
Share
Facebook
Twitter
Pinterest
Linkedin
Email
Print
Mix
Previous articleClaire Percival of Dead Label at Download Festival
Next articleRavenEye at Download Festival