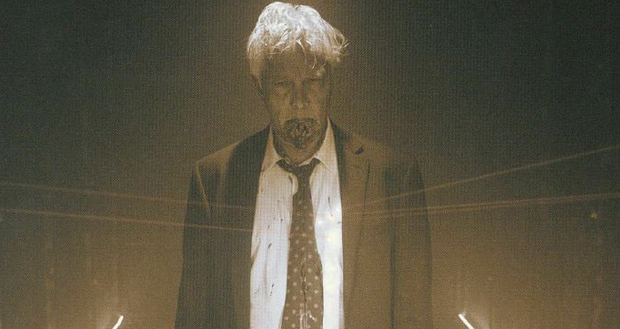 Released via Invisible Hands Music, Thorsten Quaeschning has produced the soundtrack to this thriller movie alone, but it sounds very much like the film music pioneered by Tangerine Dream – the band he now fronts – when they began developing so productively into that area back in the 80s.

Written and directed by James Dylan and starring Ron Thompson in the lead role, Cargo debuted on the silver screen in 2018 and is the story of a man awakening, trapped inside a cargo container with only a cell phone and given 24 hours to raise 10 million dollars in ransom or die. A variation on a Peter James detective novel, but we digress.

Tracks are, for the most part, individual rather than flowing into each other until later section but they are totally synthesised with a modern edge.  Mood pieces mainly, and often acting in dichotomy to the feelings one might consider from their given titles (ones derived to coincide with events on film).

Metallic pipeline drones are infiltrated by a piano effect with synthesisers drawing over a regular bass pulse before things become stranger adding colour but with a percussive dominance, and a somewhat Mediterranean texture rather than the expected hard line Germanic logic as opening number ‘Chain initiation’ speeds brightly towards conclusion.

‘Light Reading Lamp’ proves a dramatic shift musically, as if romance awaited before the abrasive techno-synth funk journey that is ‘Spotlight Effect’ supersedes, followed by the more fluid jogging melody ‘Liquid Funds Transfer’. Momentum builds with the fuzzy driving pulse of ‘Isolation Fault’ and dangerous menace one feels on hearing ‘Outside A Musical Box’.

If the term Gothic-Afro needed to exist it would be here with ‘Wanderbaustelle’ as pulsing trills build, messily taking musical detours, retreating back and heading out again as if searching for something. If it Is ‘Mass Market’ it sounds quite pretty, but you feel it’s a trap. ‘Aggravated Circumstances’ seems to deny that feeling, as if secrets were about to be unveiled and ‘New Insight’ warmly implies the protagonist is now ad safe as church mice

If that’s true ‘The End Is Not Far Off’ and ‘Cargo Main Theme’ call your bluff heralding the foggy, fuzz that is ‘Trade Mark Activation’ as an atypical Tangerine Dream pulse pinging speedily along with menace. Tracks begin to merge, ‘Tom’s Theme’ slowing the momentum , as if an epiphany were to be reached, but ‘Modulated Pulse Commands’ may begin slowly, pausing for breath even, but what sounds like speeding train rushes towards the listener.

Has the man held captive escaped or those who held him shot away with their ill-gotten gains? You’ll have to watch the movie to know that. For those purchasing the CD version of the Cargo soundtrack there is the additional bonus track of ‘Beating The Container Drums’ ; it’s a doomier number, tired, as if seeking peace and an end, and there is indeed a big synthesised bang to fill that remit. Somehow, you feel that even if the kidnapped hero escaped with his life he lost something besides more than millions.