Deliberations From The Shire with Mike James – Life Of Agony 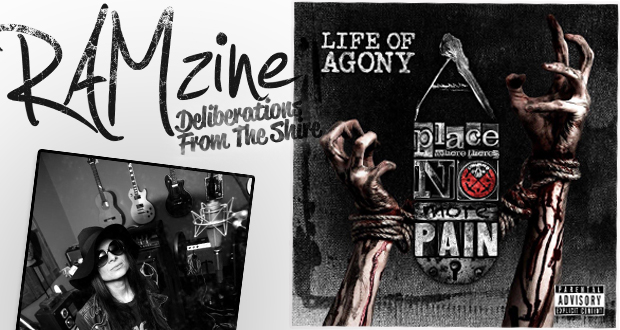 If energetic alternative rock is your thing then the eagerly awaited new offering from Life Of Agony is just the tonic. It has been 12 years since their last album and the world has changed beyond all measures. There is a drive and intensity in these new songs that only someone like Mina Caputo could pen, wearing her heart on her sleeve and letting all that has gone by in the last decade poor into the lyrics.

A Place Where There’s No More Pain is rammed full of melodic catchy tunes and is one of the most relevant albums of the first part of the year so far. There has been a lot of hype surrounding this album and for me, it stands ups to it. The musicianship is on fire with their signature sound still there even with a break of over a decade from the last recording, Mina has gone on record to say that she “Shines a light on the path of all lost souls” and it’s safe to say this is a story that needs to be told.

Stand out tracks on this album are hard to pick as all ten tracks individually stand out but for me ‘World Gone Mad’ and ‘Song For The Abused’ really hit the button.

Life Of Agony’s A Place Where There’s No More Pain is out 28th April 2017 via Napalm Records.