Founded in 2011 by Alter Bridge’s guitarist Mark Tremonti, heavy metal group Tremonti evolved from a solo project to a fully developed band and they’re getting more and more recognition as time goes by. Last June Tremonti came out with a brand new album titled A Dying Machine which represents the fourth release for this hard working quartet. The band has recently embarked on a UK tour and tonight they are playing in London at the Kentish Town Forum. A few hours before they jump on stage we get to chat with guitarist Eric Friedman, who was already Mark’s band mate in Creed. He tells us all about A Dying Machine, touring and future plans…

RAMzine: What do you like the most about touring?

Eric: I love playing the shows the most, that’s my favourite part for sure, I like travelling and meeting a lot of new people too.

RAMzine: What do you and the band look forward to when coming to the UK?

Eric: The crowds in the UK are always awesome, we just played in Manchester and we are very excited about tonight. London never disappoints.

RAMzine: You guys recently released your new record A Dying Machine which comes along with a novel. Can you tell us why did you decide to center it on artificial intelligence? 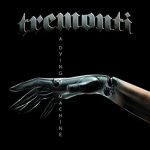 Eric: It actually all started from Mark coming up with the lyrics of the song ‘A Dying Machine’, he was trying to come up with a melody and that one title alone started the whole thing. Then, when we wrote the other songs, we decided to stick with that theme and all of a sudden this whole story started to unfold just naturally. That’s the main reason why Mark thought it was a good idea to write a book about it. A lot of people who listen to the record enjoy it and they kinda wonder what the songs are about, so if they read the book it all comes together. This is definitely not something we would do every time though because it’s a lot of work, mainly for Mark who was doing the novel as well. It takes a lot of planning, but I think it’s more of a satisfying experience to get all that stuff out like that.

RAMzine: When you think about this new album, what’s that one thing in particular that makes you proud of it?

Eric: For me personally this is my favourite album because of the way we did it together, I’ve never had that much involvement in an album before. From programming the drums at home to playing the bass and playing the guitar, I feel like this album is a big part of me as well as Mark. I like the sound which is not the same as before, there’s something new to it and I think that’s what makes me the most proud.

RAMzine: You’ve been with the band since the beginning, how would you describe the evolution of Tremonti up until today?

Eric: It’s definitely evolved, in the beginning it was more like a big part of Mark because of course it’s his project, that’s where the band’s name comes from. As things have progressed I feel personally more involved, kinda like I was saying in the last question. I love the responsibility, I love bouncing ideas back and forth with Mark, also the writing has changed a little bit. On the first record we all wrote in a room together, jamming and stuff. This time I’d fly all the way to Orlando, which is across the country from where I live in California, and we’d get together for a couple of weeks recording a little demo on our phones and then I’d go back to California to make the actual demo with the band and the production. We kept doing this stuff over and over again. So yeah this time around the whole process was a bit different.

Eric: Yes. exactly. I think if you do everything the same you are gonna end up having the same results and we don’t wanna do that.

Eric: I would say the music is a little heavier with Tremonti it’s more… I wouldn’t say energetic because the Creed guys are awesome and for me playing with them was a lot of fun and also kind of nostalgic. I grew up as a fan of Creed and I met Mark because I stood in line to get his autograph. Tremonti is definitely a piece of me because I’m more involved in it but it’s just a different kind of passion. I can’t pick a favourite because I love different things about each band.

RAMzine : How was opening for Iron Maiden and is there a band you’d like to play with in the future?

Eric: Opening for Iron Maiden was freaking awesome and it was such an honour. The shows were massive and the guys were really good to us, they are special people and the crew was also amazing. We had a blast and we would love to do it again. As far as bands for Tremonti to tour with , I’d love to do some shows with Metallica. I think our sounds would blend well together, you know heavy riffs with singing and screaming. And also I think Gojira are amazing!

RAMzine: Great choices! Before the shows you guys are also giving guitar lessons to your fans. During the ‘Guitar Clinic’ sessions you are the teacher, but what do you learn from such experiences?

Eric: Sometimes you forget how much of an influence you may have on somebody else because we are normal people with normal lives, we go home to our families and we take out the garbage just like everyone else (laughs). When we come here and we meet people that want to learn from us or that tell us we are the reason why they started to play guitar or writing songs, you realise first hand that you are making music that people love, or at least for people who listen to us. I learned to play guitar in a complete different way, I play by ear, I can’t read music or tablatures. I don’t know what I am doing, I just do it because I feel it and I hear it. So it’s hard for me to teach anything that follows a structure, but I do enjoy to see fans’ excitement and it’s always contagious.

RAMzine: How would you describe your relationship with Mark?

Eric: Anything but the blood going through our veins, we are brothers. We’ve done so much together and we spend so much time together. I’ve been playing with Mark for about twenty years so we know each other and complement each other very well. I think we’ve only fought like three times during all this time.

RAMzine: What can your fans expect from Tremonti next year?

Eric: We are gonna do some more shows through the summer before Alter Bridge gets fired up and starts running. And then I’ll get back to my job at Starbucks (laughs), just kidding.

RAMzine: Too early for a new album?

Eric: I think right now Mark is very invested because he’s so busy and you know people expect another Alter Bridge album to come out, so he’s very busy on that front in fact he’s writing for that right now. Although we are always jamming and recording little bits so we already have some ideas but he’s mainly focusing on what he’s gonna do with Alter Bridge at the minute.

RAMzine: What about festivals, are you doing any?

Eric: That’s the plan, we can’t really say much but we definitely wanna come back here and do some of the festival shows in 2019.