Well, here we are; back for another instalment of the legendary Hard Rock Hell United Hammerfest, and if the first day is anything to go by, the quality is damn high. The sun is beating down on the black shirted, leather jacket-clad festival attendees, and the mood is understandably, ridiculously jubilant.

Opening the entire festival with a song described as being about ‘sticking your dick in a cat’, Sodomised Cadaver do a surprisingly good job of playing some nihilistic and crushing death metal – albeit at a far slower pace than their Floridian counterparts from back in the day. Luckily for everyone involved, the aforementioned opening track was an instrumental, as otherwise its lyrical content would have been as amusing as a scotch bonnet enema, or worse, a Blink 182 “comedy” track.

It becomes fast apparent however that the band have far more eloquence than the feline-meets-penis introduction would merit, and actually, their lyrics are pretty damn good!

During their faster songs, ‘Torturer’ being a prime example, the band more than prove their worth, and picking up the pace is where their forte lies.

The glaring criticism the band face is that they seriously need to sort out the bass tone. For the majority of the set you can hear the strings hitting the pick-ups, rather than any actual notes, which is a shame as their bass player is obviously a talented musician.

They’re the first band of the festival and the audience is so ravenous that band return to stage to play ‘Raped by Ebola’ as an encore. Says it all really. Damn good start.

Next up is the York-born 5-piece, RSJ, and wow, things have really been notched up a gear. The band smash through expertly executed hardcore, and by their third song, full on deathcore of the highest order.

It takes about a quarter of a way through their set for the band to really get into their groove, but when they do, it is just stunning. By that point the band’s commanding lead singer bounces around the stage with as much energy as a Dillinger Escape Plan show. The further into the set the band get, the more musical and emotional depth they exhibit, and the more ecstatic they clearly seem to be.

Genre blending is an admirable, but often thankless task. It works from time to time – this is coming from someone who loved Korn’s ‘The Path of Totality’ – but sadly for Bloodshot Dawn, the blend is a bit muddy. The individuals parts work well; crust-punk come power violence for the majority of the songs is a brutal beauty, and the musicianship of the power metal interludes and solos are more than praiseworthy, but in this instance, the two just plain don’t work together.

The pummelling velocity, technicality and turns of pace of ‘Godless’, is awesome, and invokes the best of the Floridian death metal scene’s early days, but, despite the well-judged atonality, sweep-picking solos just don’t fit into this blood slathered jigsaw.

The massive fervent crowd says just how revered Venom Inc. are. When they hit the stage, it’s striking that their performance is little more than perfectly functional blackened thrash metal. Gets the devil horns violently thrown into the air, but their nihilistic lyricism and satanism feels forced and massively insincere: A real faux pas in a world where we have had the Norwegian black metal scene, Watain and Behemoth.

Yes, they are the progenitors of the black metal genre, but compared to the rest of the day’s line-up, it all seems really quite tired. Honestly, there is nothing pleasurable about having to criticise Abaddon and Mantas, but within the quality of the day, they just don’t steal the show like they should. Until the encore of course: In spite of any flaws being thrown their way, even the biggest cynic cannot admit that watching them return for an encore of ‘Black Metal’, is a truly legendary moment.

For many people, John Bush is best known as being the singer from Anthrax after Joey Belladonna’s departure. He’s also by far the best thing that happened to the snotty punks of the Big 4. But he is so much more than that, and seeing him on such raging form with *his* band, Armored Saint, is just wondrous. He is one of the best, and absolutely the most underrated singer in our fair genre, and clearly the crowd agrees.

Their highly aggressive thrash mixed with an intense love of all things NWOBHM sends the whole arena mad, and storming through a set that is retrospective of a vastly underrated career proves just why Armored Saint should be held in such high regard. 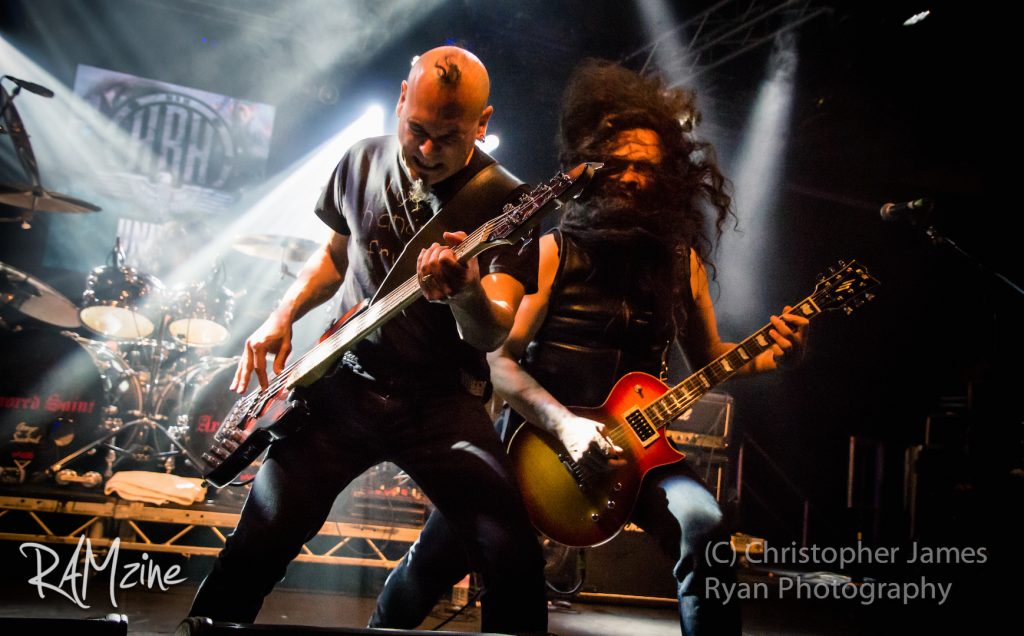 Iron-clad classics like ‘March of the Saint’ and ‘Left Hook form Right Field’ are old-school thrash slices of ecstasy, and the whole set culminates in a powerhouse performance of ‘Can U Deliver’. Yes, they certainly can.