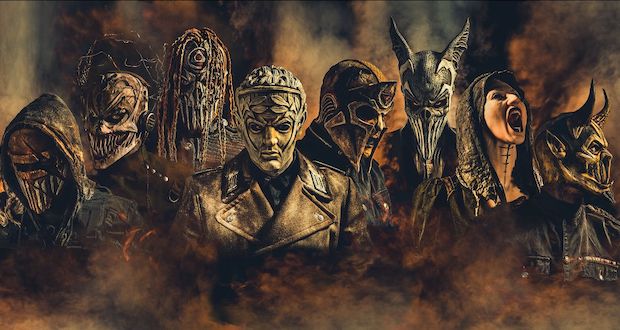 Since their formation in 1992, Mushroomhead has seen a lot of musical trends like grunge and nu-metal come-and-go over the years, and above all else have kept being themselves. This, along with their genre-straddling sound, and the unique image has gained them a dedicated following for almost three decades. Back after 5 years with their new LP, A Wonderful Life, clocking in at 70 minutes – this is the biggest Mushroomhead record to date. We caught up with the band’s founding member, Skinny, who has also been the drummer, producer, and video director throughout the band’s lifespan. We talk about the new record, the Juggalo connection, live shows, Slipknot, Star Wars, and the dreaded c-word.

RAMzine: Hello, how are you feeling during these bizarre times?

Skinny: Pretty good considering all the craziness. But ultimately not that different as I quarantine myself quite often in the studio.

RAMzine: Do you feel this is a good time for the music industry as more people are discovering new music? Or is it bad because of shows being canceled, and stores being closed?

Skinny: Yes, it’s extremely unfortunate that all of the current touring is canceled. All of the stores being closed is really shitty as well. I do think it’s cool that people have time to check out new music though.

RAMzine: In a nutshell, why should fans listen to A Wonderful Life?

Skinny: Whether you’ve been listening to Mushroomhead for 25 years or 25 minutes, I think A Wonderful Life has something for everyone.

RAMzine: This is a very long album being 70 minutes/ 17 tracks, does this reflect the amount of creativity put into the record?

Skinny: The original version only had 13 tracks. But there were 4 bonus tracks that we felt we should include for all the hard-core fans that have been waiting 5+ years for new material.

RAMzine: Over the past 25+ years you have had a lot of line-up changes,  does it sometimes feel like a new band for yourself?

RAMzine: As you have produced every Mushroomhead album, what have you learned over the years – as a musician?

Skinny: As a musician, I’ve learned to listen to what the song calls for versus just playing what I think sounds cool as a solo instrument. As a producer, I think the biggest thing I’ve learned is patience. Taking the time to absorb the material.

RAMzine: Miss Jackie is now a full-time member of Mushroomhead, but do you feel women are still misrepresented in the metal and rock community?

Skinny: No, I actually think women in rock & metal are representing the scene better than ever! There’s some killer music out there fronted by badass beautiful women.

RAMzine: Although shows and festivals are canceled, what can we expect from the next Mushroomhead tour?

Skinny: I’m really looking forward to playing some of this new material live!

RAMzine: What’s the thought process with designs of masks and costumes?

Skinny: That process is always in a state of disrepair. We are constantly changing things up as new inspiration evolves. We try to go with our gut feelings and not overthink it.

RAMzine: You also direct all the videos, do you visualize the songs when you write them or play them for the first time?

Skinny: Visuals usually come last. As the song evolves it provokes different emotions. And sometimes those emotions turn into themes for visuals.

RAMzine: As a band you are all big fans of Star Wars, would you say they play a big influence on your work?

Skinny: We are definitely Star Wars and sci-fi in general fans. Star Wars has been influencing me since I was six years old.

RAMzine: Do you care for the ‘nu-metal’ label often given to you music? How would you describe your sound?

Skinny: It’s funny I never understood the new metal label. I started the band in 92 and we played our first show in 93. Back then we used to just get the alternative metal label. It’s just Mushroomhead to me. Heavy, dark, and creepy.

RAMzine: Do you feel you have buried the hatchet with Slipknot?

Skinny: Personally I think 99% of that was media and fan-fueled. That whole thing is really silly and old. It’s like the legend of Bigfoot!

RAMzine: Speaking of hatchets, how do you feel about the ‘Juggalo’ subculture embracing Mushroomhead?

Skinny: It’s an absolute honor to be embraced by them and considered to be part of the “family”.

RAMzine: Finally, what can we expect next from Mushroomhead?

Skinny: We’re gonna keep our nose to the grindstone and continue to work at what we love. More music and art coming your way soon.

Single ‘Seen It All’ available to stream now.