Patch Amnesty: “If I can help in any way through our fundraising then it’s worth it” Road To Bloodstock 2021 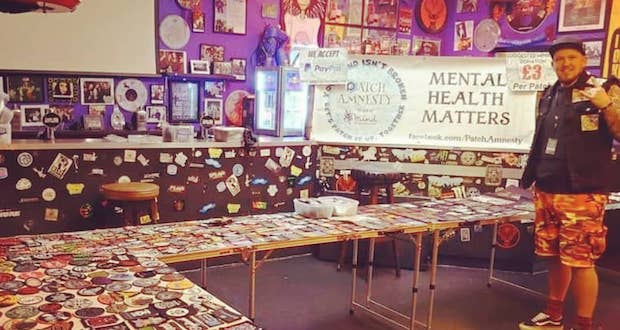 It’s almost the law of metal or heavy rock to at least want to own a ‘battle jacket/vest’ adorning the logos of your favorite bands. As your taste grows, the more patches you want. One way is to buy them new, but what if the bands you like aren’t active or you want a vintage look? Let us introduce Patch Amnesty. You have probably heard of them but they act as a kind of ‘patch charity shop’ online. As they donate to a charity close to our heart, Mind, we caught up with the man behind Patch Amnesty – Michael Lacy. Michael and Patch Amnesty will be operating at this year’s Bloodstock Festival, which is partnered with Mind also. We got to the bottom of everything patches and mental health issues.

First of all, tell us what Patch Amnesty is all about?
In a nutshell, Patch Amnesty asks people to donate their unwanted, unused, and spare patches for us to then sell on at events and online to raise money for the mental health charity Mind.

Why did you choose Mind as a charity to work with?
When I started Patch Amnesty I was on a journey to learn more about my own mental health having been diagnosed with anxiety around a year before. I had been looking at different ways to raise money and have had spare patches lying around from my own jacket – I decided to hit the socials and see if others people had any they wanted to donate. The response was incredible and within a few months, I’d had over 300 patches donated.

Do you feel mental health needs a lot more attention, especially in the modern world?
I felt this even before the pandemic hit and things have really escalated since then. I believe I’ve suffered since my mid-teens, yet it took until I was 30 to actually recognise and understand that I had mental health issues. I think mental health is now getting more attention, which is great but I fear with the ever-growing world of social media, places like Mind are always going to be playing catch up. That’s why if I can help them in any way through our fundraising then it’s worth it.

How did you get involved in taking this to festivals?
My first ever event was a spot at Primordial Radio’s AGM. It was just a table In the corner of a marquee, but the response and the feedback I got were unreal. I quickly started growing my social presence and, being a Yorkshire man, I just outright started asking festivals if they would have me. Again the response was great. We did events like Power Metal Quest Fest, the Sophie Festival, and Stonedead to name just a few. All different and all absolutely brilliant.

“If Patch Amnesty was a battle vest then Bloodstock is the back patch”.

Michael Lacy of Patch Amnesty on the importance of being partnered with Bloodstock.

How important is being at Bloodstock to you?
Bloodstock is the pinnacle. If Patch Amnesty was a battle vest then Bloodstock is the back patch. From day one the question I have been asked more than any is: “Will you be at Bloodstock?” I set about trying to get a pitch and after months of asking, I think they finally said yes just to shut me up. Although I have never been, I believe Patch Amnesty is the perfect fit for Bloodstock, especially as this year their chosen charity is Mind. The potential at Bloodstock is massive. It’s 10x bigger than our biggest event to date and I have high hopes we can raise a lot of money for MIND.

Why patches? Were you a patch collector, or battle jacket wearer back in the day?
As I mentioned before, I had a few spare lying around but I was very new to the patch and vest world. At the previous year’s event, I had been admiring all the other people’s [patches] and chatting with them about their patches, etc. I and another guy decided we would make our own for the following year. I have definitely become a patch enthusiast now though. Although people queue up to tell me my music taste is terrible, I absolutely love the whole process of finding, building, and sewing your own vest. I would highly recommend it. I have four of my own jackets and plenty of patches of my own..

What’s your favourite patch in your collection, or that you have sold?
That’s a tough one. My first ever patch was the Linkin Park Hybrid Theory patch so that’s definitely up there. I also absolutely love my Alien Weaponry back patch which was custom made from a t-shirt by battle jackets London. And of course, my own Patch Amnesty patches are all awesome too.

Which ones have surprised you in terms of value?
Iv had some ‘grails’ over my time doing patch amnesty, most of which are Iron Maiden patches. I’ve had an Iron Maiden back patch go for £300 which is the most I’ve made from one single patch. I’ve also had some great WWE wrestling patches in, I had an official Stone Cold patch that raised around £50. Although I’m fully aware that I’m probably inflating the market somewhat, it’s nice to know I’m getting patches to people who may have been searching for years for them.

So can we donate ANY patch?
Yes. Although I am wrapping things up in September, I am still taking donations as we have 2 events left. In the two and a bit years we have been going I’ve had patches donated from all over the world. And it’s not just music patches. Film, cartoon, biker… You name it, I’ve probably got it on a patch.

How can we get involved?
I’m on Facebook, Twitter, and Instagram as well as having my own website www.patchamnesty.co.uk. Just drop me a message and il send you the details for donating patches.
You can also email me at patch-amnesty@hotmail.com.

Michael will be at Bloodstock Festival which takes place between 11-15th August at Catton Park, Derbyshire. Click here to buy tickets.

If you are struggling with mental health issues, please talk to someone. You can find out more about Mind at their website, by clicking here.