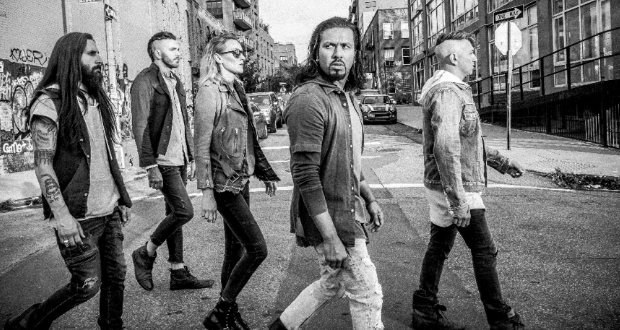 American rockers Pop Evil have delighted their fans in Europe and in the UK with a well awaited headline tour. After releasing their self-titled album last year these guys have been on the road non-stop. In 2018 they were also part of an epic bill which saw them supporting Cheap Trick and Poison whilst promoting their new exhilarating songs. ‘Waking Lions’, ‘Colors Bleed’ and ‘A Crime To Remember’ are the three hit singles that have already come out of Pop Evil, a record that truly represents a wake-up call for the band. A couple of hours before their London show, we caught up with frontman Leigh Kakaty and drummer Hayley Cramer to talk about Pop Evil and their life on tour.

RAMzine: It’s nearly the end of this European tour for you guys, how’s life on the road?

Hayley: We’ve been working really hard in America, then before America it was Canada and then coming over here. My body is definitely tired now. The other day I had some great massages so I could get through the day, Leigh’s voice is affected too. We need this time off now. However I have to say I am proud of these boys because coming over to Europe straight from the American tour with the jet lag and everything, you know, going through a totally different environment is tough. We also had some crazy weather in America, I don’t know whether you heard about it…

Hayley: I can’t even begin to describe how cold I felt sometimes. So you go on stage and you are sweating and then you step outside and it’s freezing, no matter how many layers you got on.

RAMzine: Did you guys fall ill?

Hayley: I think everybody in the crew, including the band, have been suffering some kind of cold. It’s hard when you are on a tour bus ‘cus everybody gets everything. It’s been a tough run but now we are through the end of it and I’m super proud as the shows have been amazing in Europe. I was blown away by those crowds, it’s such a good vibe and people were hungry for music. It’s been two years since we’ve been here so I really felt that kind of anticipation.

RAMzine: Cool! What crowd in Europe gets your music better?

Hayley: That’s a tough one!

Leigh: Germany was fantastic, same as the UK. This tour was especially crazy, Manchester last night was great. Everyone is singing all the songs and I’ve had laryngitis so I literally sang one note and they sang the rest of the show (laughs).

RAMzine: That’s always helpful.
Leigh: Yeah it’s been nice and especially for me coming over here from the States and winning over all these crowds is amazing. The UK has been incredible, obviously it’s something very personal to our band as Hayley is from the UK so doing well here is also very important to all of us.
RAMzine: How’s coming back home for you?
Hayley: It’s really really good and now I’m gonna have a whole month off so I’m really excited about that. Normally I’d be home after a 24 hours flight but now it’s a different story.
RAMzine: Now it’s all the way around. The guys are gonna have to travel back.
Hayley: Actually we are finishing in Amsterdam which I’m super happy about because I’m just gonna stay there for a couple of days.
RAMzine: Makes perfect sense.
Hayley – Right? (laughs). That’s the perfect place to relax, I’m gonna start my time off well in Amsterdam.

RAMzine: About this tour, do you have any funny anecdotes you can tell us?

Leigh: It’s been brutal ‘cus I have been sick a lot.

Hayley: I know. I mean I’m sure there is a funny story. There was one night when we all went out partying but I can’t really remember much (laughs).

RAMzine: That must have been fun then.

Hayley: Yeah, probably the other guys can tell you all the funny stories about that night but I can’t personally remember it. I only know that by the end of the night I was underneath this disco ball (laughs).

RAMzine: Sounds like a great night to me (laughs). What is your very first thought when you get on stage?

Hayley: Let’s fucking do this. When I’m backstage I get very very quiet and chill, a totally different person from what you see on stage but as soon as I sit behind my kit..

RAMzine: As a female, how do you see yourself in this industry? Do you ever find it hard at times?

Hayley: It’s definitely easier now than it used to be. If we go back twenty years I thought I was the only female musician in the world but everywhere you turn now there’s more and more of us. I never really thought about the male and female thing, when I play drums I’m not really aware of my female body. I’ve been in bands with guys, I’ve been in bands with girls and I never saw an issue with that. I’m good at what I do and I know I can play just as good as the guys. That’s not to be big headed, it’s just what I do. And as soon as I started playing drums I knew I wanted to do this for the rest of my life.

RAMzine: Great way of thinking. Your fifth album Pop Evil came out last year, how’s that going so far and why is it self-titled?

Leigh: It’s going awesome! It’s self-titled because it feels like it’s our first record really and it’s also Hayley’s first record. We know who we are now so that confidence is Pop Evil. Feels like a real awakening for us, songs like ‘Waking Lions’ and ‘Be Legendary’ might help motivate others to be better, but they also motivate us. And being better together means being okay to be different, to not agree with each other’s all the time but being able to constructively say ‘I don’t agree with your ways’ so that the other person is able to take two steps back and think ‘Why is he saying that?’. We all want the same thing, we all want the band to go forward and for this reason we need to make decisions together.

Hayley: True and I love the fact that it’s self-titled now. If you think about a band’s first album, you don’t know yourself. It’s kinda like trying to self title your life at 16, you can’t! Because when you get to 25 you are a totally different person and you probably like yourself better too.

Leigh: If you think about football, in the early years you had a jersey and it didn’t have a name on it. Once you made it to a professional level you could finally put your last name on the back just like now we can finally put a name on the jersey.

Leigh: I am a sports guy.

RAMzine: Do the singles represent your album better or do you have any personal preference about the new songs?

Hayley: I love ‘Ex Machina’ and ‘Nothing But Thieves’. We were playing ‘Rewind’ on the previous tour and I absolutely loved playing that song live. I don’t know whether it’ll be a single or not but if it’s not it doesn’t detract from the fact that I think it’s a great song and I enjoy playing it.

RAMzine: What song from the new album do you particularly enjoy playing live?

Hayley: Yeah ‘Waking Lions’ is great and also ‘Be Legendary’ because it’s a lot of fun.

RAMzine: Motley Crüe biopic ‘The Dirt’ is coming out soon, how was working with Mick Mars?

Leigh: Incredible. Mick is a legend, he gave us a song that will be around for the rest of our lives. There was a crazy situation during the making of ‘Boss’s Daughter’ but I’ll tell you all once my voice gets better.

RAMzine: Can’t wait to hear that. Last year you toured with Poison and Cheap Trick, how did that go?

Leigh: Awesome, best tour ever, I don’t know if it’ll ever get better than that. It was an incredible experience. Cheap Trick had the band up performing with them every night, Poison had me up singing with them every night so it’s a popular showcase. We’ve been blessed to have some very good classic rock tours and also friendships we built on those are gonna last for a lifetime. Judas Priest back in 2009 was great too. We feel very fortunate.

RAMzine: Any future plans with the band?

Leigh: Not right now. We are just focusing on playing as many popular headline shows as possible so we can get our music out there. But who knows, time will tell us right?

RAMzine: Sure. All the best and thanks for your time.

Share
Facebook
Twitter
Pinterest
Linkedin
Email
Print
Mix
Previous articleThe Fallen State about their forthcoming album ‘We are really proud of it. We can’t wait for people to hear it’
Next articleMotörhead to release double 7” single ‘OVERKILL/ BOMBER’