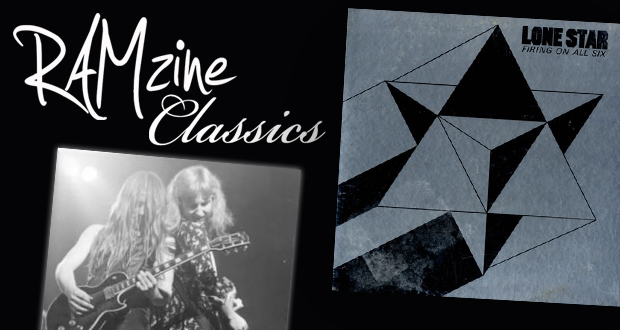 Lone Star are an underrated band, from Cardiff, forming in 1975 and swapping various members of the band for the line-up they had in 1977. I first spotted them on The BBC in Concert in December ’77, introduced by Pete Drummond. Their remarkable album Firing on all Six (which was the band’s second album, Lone Star being the band’s first and released the previous year in 1976) had been released a few months before and of course the obligatory tours and TV shows followed.

The line from ‘The Bells Of Berlin’, “I can feel sadness, I can feel joy, between the two I am torn,” is a good way of describing how I feel about Lone Star. Remembering them so clearly as I was transfixed by 20-year old Jon Sloman’s hair, which he flicked about to his heart’s content and mine! His voice bellowing the words of ‘The Bells of Berlin’ just blew me away, amid the dry ice, and where keyboards dominated the sounds, transporting me to happier moments back to a time where things were a lot less complicated than today.

Vinyl was still around and always good for us ‘rockers’ to obtain multi-coloured vinyl, other than just black, the hiss from a stylus was the ‘norm’, large stereos dominated every teen’s bedroom, not to mention there being just two genres Rock and Metal, and we knew which was which no hesitation, unlike today where there are not only genres but sub-genres to deal with.

Lone Star employed a member of early UFO being fresh faced Paul Chapman, who when Lone Star crumbled a year later went back to UFO before joining bassist Pete Way to form Waysted.

That Christmas saw me get wasted while watching Sloman and the band run through their tracks on a TV that was not as clear as of today’s, but it mattered little.

Playing their album over and over, the cover now dog-eared, but the tracks still sound fresh and inviting from when I first heard the band on the (BBC iC) some 39 years ago and you can too – follow the link Here:

Although they only lasted for three years, they left an incredible legacy. I still own Firing on all Six and even got the chance to meet Sloman who kindly signed my Lone Star cover, where it proudly sits in my collection today and you know what? It’s not going anywhere!