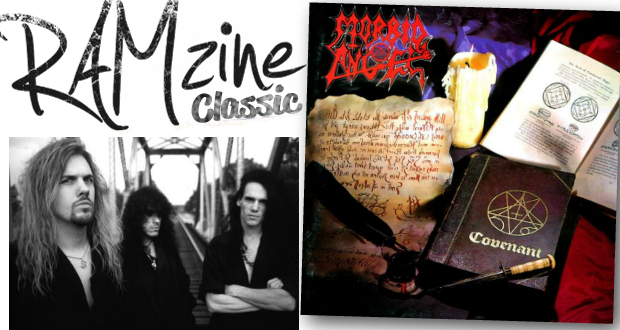 With the release of their latest album, Kingdoms Disdained, it is important to look back at the early career of Morbid Angel instead of focusing on the legendary misstep released in 2011 and remember why the band was considered one of the original death metal bands with their landmark 1993 album, Covenant.

Covenant opens with ‘Rapture’ and never before has a title been more accurate, the track starts with a sound of pure hostility before unleashing the violent grinding tremolo picked riffs of Trey Azagthoth. Soon to be accompanied by the legendary double bass drumming of Pete Sandoval, this song wholly represents an apocalyptic event and doesn’t hold back in the slightest, everything about it is punishing.

‘World of Shit (Promised Land)’ is a more progressive approach despite being the shortest song on the album with the exception of ‘Nar Mattaru’. It starts out with a slow groove laden introduction before returning to the abrasive anarchic death metal that has so far dominated the album, this track exists to showcase the talents of Pete Sandoval who may very well be the greatest death metal drummer to ever live.

His double bass technique is renowned among the elite of death metal and is even more impressive when you take into consideration the fact that he had never played double bass before joining the band.

Trey Azagthoth has been described as “The Eddie Van Halen of Death Metal” and this is probably the most apt description of him you can find, tracks like ‘Vengeance is Mine’ make use of his wild flailing guitar solos and intense whammy bar abuse to outstanding effect. At times they sound like pure noise and seem to have no pattern or musicality to them which is the point, they fit perfectly over the untamed chaos that the rest of the band produces behind him.

‘The Lion’s Den’ is a clear example of the anti-Christian imagery the band has become known for. While themes of blasphemy has always been a prominent lyrical theme, Morbid Angel use the blasphemy angle in such a way that it tells stories that are critical of religion. This made them stand apart from bands like Deicide, whose entire career has been predicated on the fact that they disapprove of religion.

Covenant has one song that was re-recorded from their unreleased 1986 debut, Abominations of Desolation, in the form of ‘Angel of Disease’ and this version is superior mainly due to having a better fitting vocalist. Original vocalist Mike Browning does a decent job but pales in comparison to the undisputable power of David Vincent whose vocals fit the themes of Lovecraftian horror so much better.

While some may argue the raw and unrefined sound of Abominations fits the tone of the song better, it definitely is an improvement in terms of the instrumentations, particularly in the vocals. Mike Browning is a capable vocalist but doesn’t fit well in Morbid Angel but that may be due to the band still developing their sound as ‘Abominations’ is one of those early death metal releases that feel more like a thrash album with gruff vocals and unpolished production.

‘Sworn to the Black’ is as close to thrash as Morbid Angel tend to get, the song still features intense drumming and wild guitar solos but in a more restrained manner which makes sense as the latter half of the album opts for a slower, grinding approach culminating in one of the most iconic death metal songs ever written.

‘God of Emptiness’ is a song that came as close to breaking through to the mainstream as death metal could possibly get at the time. It’s strange guitar work and slow droning tone working with David Vincent’s clean and harsh vocals create a scene of pure darkness.

The droning spoken word segments are what make Morbid Angel stand out from their peers. David Vincent’s “clean” vocals countered with his growls help display the contempt of some kind of malevolent deity. It creates a unique dark atmosphere that so many have tried to imitate, simply put, this song is the definition of pure evil.

Released in 1993 alongside classic albums like Heartwork by Carcass, Chaos AD by Sepultura and Individual Thought Patterns by Death, it’s clear why Covenant stood the test of time and why Morbid Angel is revered as such a unique voice in what was, at the time, an oversaturated genre.