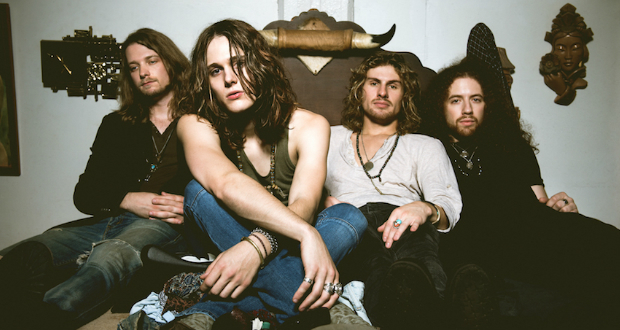 Meet the band who will not only be playing with Guns N’ Roses this year, also Aerosmith, Deep Purple and Tom Petty!

Tyler Bryant is a 26-year-old guitarist hailing from Texas. He moved to Nashville, Tennessee, at age 17 to write songs and that is where he met bandmate Caleb Crosby (drums). Completing the line-up of Tyler Bryant & the Shakedown is Graham Whitford (guitar) and Noah Denney (bass). Last year the band toured with AC/DC before playing support slots with their friends The Cadillac Three. This summer Tyler Bryant & the Shakedown certainly have another good run ahead of them, you will also be able to catch them on the Zippo Encore Stage at Download Festival, Sunday 11th June.

Their 2015 single ‘Loaded Dice & Buried Money’ is slick Rock N Roll with a groove to it that will have you bobbing along, pint-in-hand, in no time.

Other tracks such as ‘The Wayside’ are so simply captivating that you feel you are falling in love or feeling that problem at the back of your mind fly away. It’s not often you can feel the passion of a song through a YouTube video. Most bands can only achieve this with a live performance. This track shows how passionate and beautifully Tyler Bryant & the Shakedown are able to make music.

The band have been hard at work writing their follow up record to their 2016 EP The Wayside – we hope to hear a preview on the holy grounds of Donnington next month!

I image almost every journalist who writes about Tyler Bryant & the Shakedown predicts them a big future. It’s not just the number of amazing shows they have managed to get under their belt over the past few years, it’s the way their songs capture your attention playing to a range of emotions throughout their show.