Deliberations From The Shire with Mike James – 1919 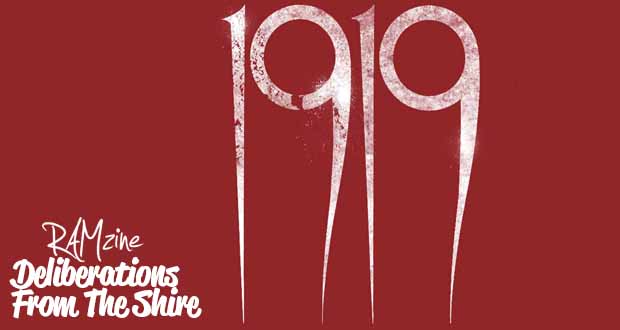 Bloodline is the second full-length album by post punk and early “Goth” pioneers 1919 and comes only 33 years after their debut release. The Original line-up got back together in 2015 for a splattering of festival shows and two European tours to coincide with new EP Death Note.

This album fuses dark and heavy bleak atmospheric melodic sounds that for me remind me of a time in my life full of teenage angst hiding away from the world in my room listening to the likes of Placebo, Killing Joke or The Cure, whilst drawing on the minimalist intensity of no frills dance music that anyone into this style of “Goth Rock” would come to expect from the scene. Having seen chart success in the 1980’s when the emerging underground sounds were breaking into the mainstream 1919 are looking to replicate that in a modern music industry that nowadays is soo unpredictable that anything is a possibility.

Some of the tracks that stand out on Bloodline are ‘The Vanity’ with its thunderous bass hook that punches you right in the chest along with ‘Retrograde’, who’s riffs and lyrical contents combine to leave you wanting more. The soaring vocals on ‘Disassociation’ (like with the rest of the album) are as if John Lydon’s paunchy and directness with Ian McCulloch’s haunting and unhinged voices have had a singing and snarling baby.