Deliberations From The Shire with Mike James – Seether 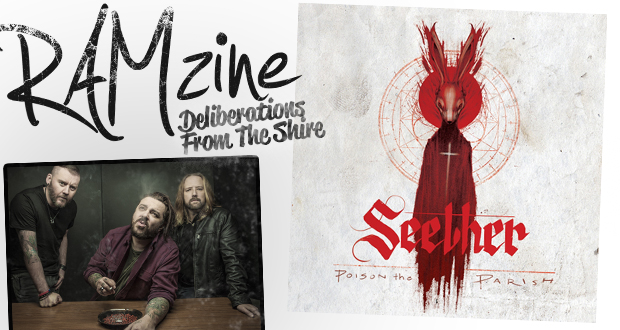 Poison The Parish is the fresh new album from South African stalwarts Seether. It pulls huge influences from the heavier side of Grunge to the early sound of Nu-Metal, think Nirvana meets Deftones with a sprinkling of Tool and Alice In Chains in there too. This is the seventh album from their illustrious career and the pressure is on as the last four albums all went top 20 in the Billboard top 200. From having Poison The Parish on constantly for a few days now I don’t think getting this album in the top 20 again will be a problem.

Front man Shaun Morgan has put this album out on his own label as well as producing it and running his own festival too. This album is heavier than others in their catalogue with more emphasis on the guitars and louder drums but is still very radio friendly with catchy sing-a-longs even if the subject matter is a little deep and in places tells the story of Shaun’s recent life.

Standout tracks for me are the lead single ‘Let You Down’ which just sound epic when cranked up to full volume alongside ‘Nothing Left’ & ‘Stoke The Fire’ which showcases this heavier sound to its best.

Seether Poison The Parish is out 12th May 2017 via Canine Riot/Spinefarm.