Mad Dogs and Englishmen – These Are Not Poetic Times 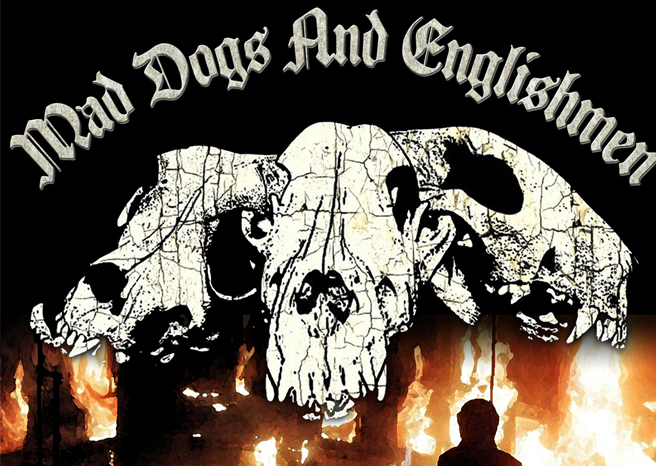 Mad Dogs and Englishmen are a Hard Rock trio from Manchester. The band consists of Lee McCabe on vocals and bass, Wail Shark on guitar, and Eddie Leopard on drums. The bands main influences included such greats as Black Sabbath, Motorhead, Led Zeppelin, Metallica, Guns N Roses, Orange Goblin and Down to name but a few. Formed back in 2011, since then have released EP ‘Live And Unleashed’, and now April 2014 see’s the release of new 4-track EP ‘These Are Not Poetic Times’. Which was recorded at The Temple of Fire practice room, in Manchester.

“The recording process was quite long and drawn out as we had to fit it into our busy schedules, but worth the wait and we’re all pleased with the final product!” say Mad Dogs and Englishmen.

‘These Are Not Poetic Times’ guides you through a Hard Rock Journey, kicking off with ‘Profit Through War’. This song strikes me as a punk track, with Lee’s vocals, and that determined bass riff. Its also because this song has so much angst and meaning, that I start think about punk. Mad Dogs and English Men tell us that this track is about “global greed, war mongers and media lies to corrupt and blind the public”.

The second track ‘The Gank (Here Comes The Laeman’ starts fairly smoothly, continuing to some great riffs, followed by Lee’s vocals – that blend extremely well with this music, it’s as if these musicians were all destined to play together. Mad Dogs and Englishmen tell us that this track is about “the red light district around the town hall in Rochdale about 200 years ago”.

‘Ledrose’ was the first released single of the EP, it’s a bit more slower and more Hard Rock then 1 and 2 which as i mentioned strike me as a tad punky. Many comparisons from the 80’s come to mind to me, listening to this track: Black Sabbath, Led Zeppelin, Guns n Roses, AC/DC. Mad Dogs and Englishmen tell us that “‘Ledrose’ is about domestic violence”.

“‘Mother Nature’s Fun’ is about taking loads of mushrooms and hearing voices telling you to murder your girlfriend and all her friends and getting rid of the bodies” say Mad Dogs and Englishmen. A dramatic meaning behind this last track on the EP, I wouldn’t however call this song dramatic. It’s Hard Rock, it’s aggressive, but it’s not loud. Perhaps that would be a different story live.

We asked Mad Dogs and Englishmen whats next, to which they replied “More writing and recording with t-shirts and Doggy bags coming very soon!”. I can image kicking back at a festival listening to this live, chilling in the sunshine, listening to them great riffs. This is an EP with attitude, meaning, and pure Hard Rock.

Mad Dogs and Englishmen ‘These Are Not Poetic Times’ is out now. Click here to stream.