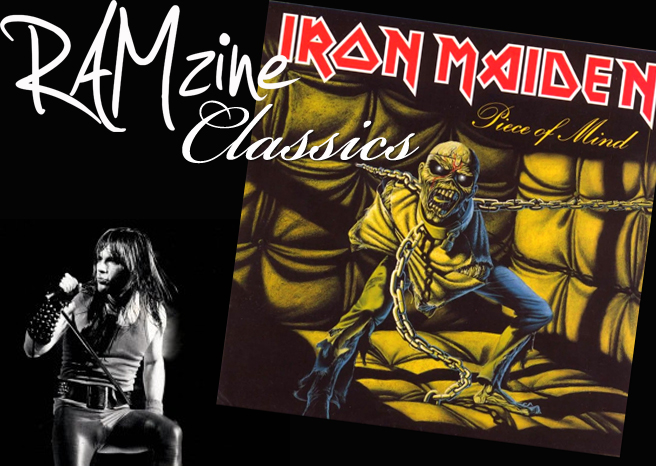 Iron Maiden are ‘that’ band for me. They’re my absolute favourite band in the world, and have become so important to me. They have released a plethora of classic albums, all of which will end up being covered in this RAMZine classics series. Today I’ll be analysing their 1983 masterpiece “Piece of Mind.” This album has become one of the most important albums I own simply because it is Nicko McBrain’s first album with the band. Nicko is the single biggest influence on my drumming, and naturally this album resonates with me. His larger-than-life personality along with his amazing musicianship makes him a brilliant role model. I’m still holding out hope I can have a beer with him one day.

On to the album itself, and it opens up with simply the best drum fill I have ever heard. The intro to “Where Eagles Dare” is Nicko announcing himself to the Iron Maiden fans, and I don’t think either he or the fans have looked back since. What follows is a heavy metal tour de force tribute to the RAF in World War Two, their heroics the inspiration for Dave Murray and Adrian Smith’s two pronged guitar assault upon the ears.

Following on from this astounding first track is the epic “Revelations”. Telling the tale of Ancient Egyptian times, this song offers up a variety of tempos, dynamics and range. It really sums up exactly what Iron Maiden are known for. The mid section guitar harmony grips me every time and is just amazing. Steve Harris’ bass playing and song writing really excel on this particular track, with his penchant for the overblown fully indulged, and rightly so.

Next up is the stomping “Flight of Icarus”, a nod to the Ancient Greek myth of the same name. The song really encourages the listener to nod their head and tap along with its groovy drum beat and classic rock chords moulding so well. It is a classic Iron Maiden single, with a commercial feel yet keeping that distinctive Maiden sound that we know so well.

Next is “Die with Your Boots On”, an ode to dedication in battle across all walks of life. The opening riff is classic Maiden, with its foot tapping rhythm and sing along chorus. This song is really underrated, and with the song which comes after it, it’s completely understandable why.

The song which comes next is “The Trooper”. Based upon the Charge of the Light Brigade, this song is a call to arms, with its chorus really catching the ear of the listener and Bruce Dickinson spitting the lyrics like his life depends on it. This song is an Iron Maiden anthem, and one which blows the roof off at their live shows, and is a real highlight of the album.

The next four songs are all underrated, but yet deserve their places on this album. “Still Life, “Quest for Fire” and “Sun and Steel” keep the album going at a galloping Maiden pace, yet it is the album’s closing song which is the genuine highlight.

“To Tame A Land” is a classic Iron Maiden epic. The eastern guitar melodies at the start really remind me of Led Zeppelin in their heyday and it conjures up images of nomadic men travelling through the desert attempting to find refuge from the harsh sandstorms. Iron Maiden have always been amazing at painting pictures in the minds of their listeners and they certainly achieve that here.

With Iron Maiden being so important to me, it is only natural that I would love this album. However, considering it is their first album with a new drummer and the even more amazing fact that they were following The Number of the Beast, this album is truly great. It delivers on all accounts and is one of the most complete albums that this legendary band has produced.