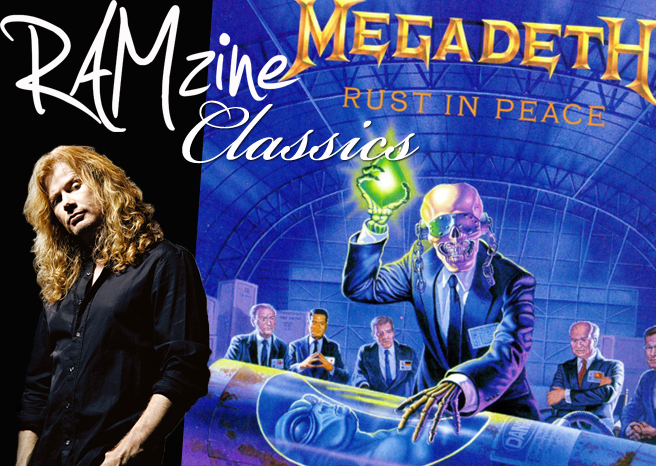 Some people say Megadeth are in the shadow of Metallica, with singer Dave Mustaine being a former member of Metallica. To those naysayers, I say; “Nay”! Megadeth deserve to be considered as a top quality metal band outright, whatever their previous relationship with Metallica may have been. This is proven by the strength of 1990s “Rust In Peace”.

The lineup on this album was vocalist/guitarist Dave Mustaine, guitarist Marty Friedman, bassist David Ellefson and drummer Nick Menza. Many people consider this to be Megadeth’s classic lineup, and judging by this album, it is not hard to see why.

Opening with the frenetic “Holy Wars… The Punishment Due”, the album truly starts as it means to go on. The riffs are so technical and the pace set by the drums ensures a galloping start to the album. The time changes in this song are so fluid, and offers a different slant on thrash metal. This song in particular has a very progressive element to it, specifically the aforementioned time changes and themes of the song.

Next up is “Hangar 18”, which ensures the pace does not let up. Mustaine’s vocals are often criticised, however on this particular song they really stand out. However, once again it is the virtuoso guitar work from Mustaine and Friedman which is the real highlight. The sheer number of riffs in this song is incredible, and the fact they all flow from one to the next perfectly is a real testament to the band’s songwriting abilities. 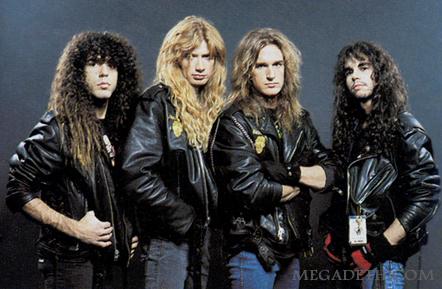 Following on is “Take No Prisoners”, a song which belongs to drummer Nick Menza. His fills and accents really complement the riffs perfectly, and his slightly off beat drum parts at the start accentuate the palm muted guitar riff. From there, the call and response vocals over a really heavy half time feel riff, and later a quicker riff, adds a further dynamic effect. This really shows Megadeth’s versatility.

Up next is “Five Magics”, which is a song built around a brilliant odd time groove. The band’s skill is incredible and the way they make the odd time intro flow into a bass led song is just brilliant. The way the guitar part dances over the top of the solid drum part really creates an ethereal effect. Once the song drops into the standard Megadeth pacey metal, it comes alive even more.

Next is “Poison Was The Cure”, which starts off fairly relaxed, and soon goes into some serious speed metal. The sheer aggression behind this song is fantastic, it comes across perfectly in the music. Mustaine’s aggressive vocal style suits this perfectly, and the way certain drum fills follow staccato guitar lines really brings the song out. This is a real hidden classic on this album, and one of the genuine highlights.

Following this is “Lucretia”, which has a really catchy guitar hook, and a serious commercial vibe. The groove throughout the song is really foot-stomping, and the catchy lead line keeps returning. Menza’s drums hold the whole thing together, in the solid verses and in the offbeat bridge parts. This really is the sound of a band right at the top of their game, and they’re clearly loving every minute of it. 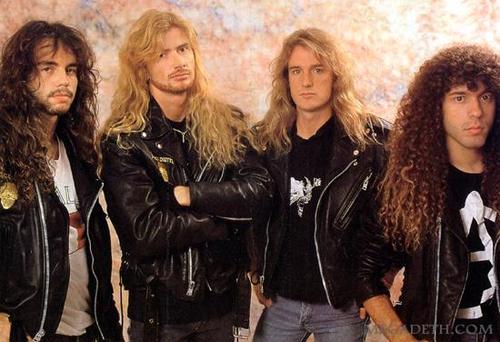 Up next is “Tornado of Souls”, one of the band’s better known songs. The main riff is a thing of beauty, palm muted with a big chord at the end, it really is ridiculously catchy. The vocal harmonies between Mustaine and Ellefson is the main highlight of this song; it’s surprising how in a band as heavy as Megadeth they can pull off these excellent harmonies. Once again, the lead guitar lines, and the solo, is simply incredible.

Following on is “Dawn Patrol”, a heavy bass led song which calls to mind early Black Sabbath material. The sinister spoken word style of this song is really haunting, and offers a brilliant departure from the thrash style of the rest of the album.

Closing the album is “Rust In Peace…Polaris” which once again is driven by Nick Menza on the drums. The opening drum fill and the way the riff fits to it is simply brilliant. He is a really underrated drummer, and yet is one of the most technically adept and just plain brilliant drummers of the past 30 years. As the song goes on, Mustaine’s political lyrics spit forth from the speakers over a sea of guitars. What a stunning, progressive way to close this fantastic album.
In closing, this is simply a wonderful thrash metal album. Megadeth are one of the best pure metal bands out there, and are still producing consistent and quality material to this day. However, this is their crowning glory. Purchase it, and prepare to have your face melted.