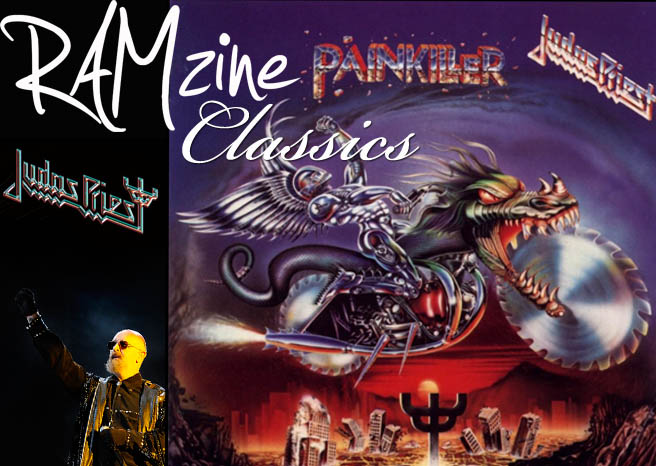 Faster than a bullet. A terrifying scream. These may be the opening lyrics to this album’s ferocious title track, but it also very accurately describes the band involved. With one of the most varied and consistent sounds in metal, Judas Priest have been pioneering heavy metal since the 1970’s. However, with this album, they stormed to new, heavier, faster heights with what many consider their classic lineup of singer Rob Halford, guitarists Glenn Tipton and KK Downing, bassist Ian Hill and drummer Scott Travis. The album in question is of course the 1990 masterpiece “Painkiller”.

The album opens with the title track, “Painkiller” which begins with simply one of the fastest and most destructively effective drum solos of all time. This fill and subsequent pounding drum beat really set the tone for the song, which develops into an absolute metal masterpiece. Halford’s piercing screech really gets across the manic robotic precision of the song and the guitar riffs are delivered with venom and accuracy. This is a storming song, and if you’re not banging your head and screaming along with the chorus then you’re a better person than I. The instrumental mid-section with its stunning sweeping intro and insane guitar solo shows once more why Priest are one of the best bands in the history of metal.

Following on is the excellent call-to-arms “Hell Patrol”. The marching feel to this song goes with the stunning riff and the guitar harmony in the mid-section of the song is stunning. The chorus is a real sing-along anthem and stadiums around the world would sound incredible singing this back to Halford and the band.

Next up is the storming “All Guns Blazing”. The song opens with acapella vocals, and Halford’s shriek really comes out here, sound musical and threatening. The song’s stricture is that of a classic rocker and if it wasn’t just an album track it would have become a metal club classic. The chorus melody goes along with the guitar riff, creating a real sing-a-long feel.

Up next is the thrashing mad “Leather Rebel”. The drums really take over this song, changing drum beats through each of the parts, yet maintaining a constant tempo. Scott Travis really announced himself to Judas Priest fans on this album, his drumming being one of the main highlights. His double bass drum work is simply mind-blowing, with the speed and precision rivalling that of any drummer in the world.

Following on from this is the aptly named “Metal Meltdown” which is pretty much a theme for the majority of the songs on this album. It’s sharp guitar figures and the way it is underpinned by a rolling bassline make this a real surprise on the album. The way the guitars switch from palm-muted riff to open chords for the chorus is fantastic and Halford’s vocals excel here, instilling fire in the belly of the listener which makes you want to go drink some beers and rock out until the early hours.

Next up is one of my personal highlights of this album, the fantastic “Nightcrawler”. The atmospheric intro underpinned by clean guitar really tricks the listener into what to expect. What you get during what follows can only be described as utter musical perfection. The way the vocal melody follows the riff in parts yet seems to follow a life of its own is truly stunning and it is testament to Priest and their songwriting prowess that they have managed to create a song so great which has all the commercial potential in the world, and yet is still an utter heavy metal classic. I had the chorus stuck in my head for days and have not stopped singing it yet!

Following this masterpiece is the brilliant “Between The Hammer and The Anvil”, which is probably the most metal song title ever. This song really shows Priest’s main strength as a band, which is their killer riffs combined with Halford’s wild vocal range. It is clear why they have inspired so many amazing bands, from Metallica to Ugly Kid Joe.

Next up is my number one highlight of the album, the atmospheric and utterly timeless “A Touch of Evil”. The main riff here is so simple yet completely effective. The vocals and occasional synth mix perfectly and it really shows their versatility. This song is at a much slower tempo and therefore is stunningly heavy. The chorus really is anthemic and the guitar solo completes the song perfectly.

Following from this is the fantastic “Battle Hymn” another call-to-arms in an instrumental format. This epitomises the tribal spirit of metal fans, all banding together to support metal, their common cause. It is really just stunning and conjures up images of armies assembling ready to do battle.

Closing the album is the brilliant “One Shot At Glory”. This song can only be described as classic rock influenced metal with the pinched harmonics in the main riff adding a stunning effect. The chorus is perfect for an album closer, with its vocal melody getting stuck in the listeners head for days.

To sum up, this album is an absolute masterpiece by one of the greatest heavy metal bands of all time. These pioneers of our genre adapted their sound yet still kept faithful to what they always believed in: completely honest heavy metal, filled with integrity which we can all be proud of. If you don’t own a copy of this album, please I beg you, you will not be disappointed if you purchase it. You may just be inspired to start a musical venture of your own. I know I was. Thank you Judas Priest.