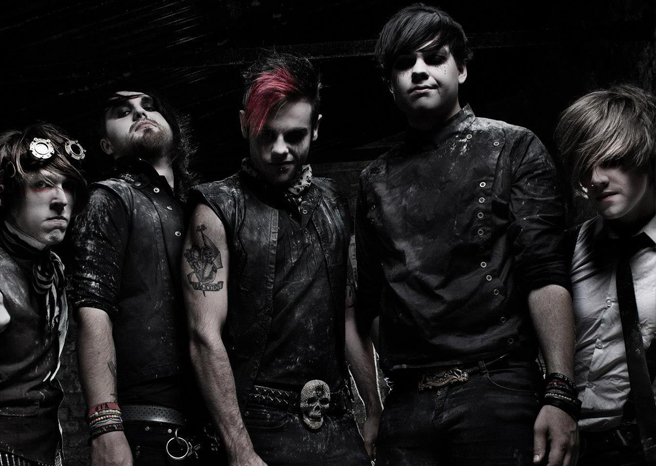 Smiley Dave of RAMzine caught up with the Frearless Vampire Killers at this years Takedown Festival. The press room was very busy, Smiley Dave describes it as a ‘farmyard’. As this made the audio on our video a little hard for you to hear we have written it up for you, below.

RAMzine: You guys were on earlier today on the Main stage how was that for you?

Drew: “And everyone was invited!”

Laurence: “It was really good!”

You guys come with such a following, it’s almost like the same thing that happened with twilight but with you guys. Even if you did something absolutely outrageous like, I don’t know… Slap a pidgeon in mid-air, they’d still follow you

Laurence: “What did we say earlier? We did say, ‘This is a song about paedophiles’ on stage today. And they loved it, they were jumping about.”

Did you mention Jimmy Saville?

Laurence: “No I just said ‘Grab your nearest paedophile and dance’.”

Now you guys have just received some amazing news about the Kerrang Awards, You’ve been nominated for 2 Awards?! (Best New Band and Tweeter of the year: @FVKLaurencne)

We’ve got a twitter game to play later where I scroll through your accounts to about four months and you have to guess who in your band tweeted that sentence and I was there for hours scrolling down!

Laurence: “We try to reply to fans as much as possible. In the old days I replied to every tweet until about two months ago, when we quit our jobs and things went nuts. I don’t really have time to tweet anymore, I try my best.”

Laurence: “Yeah I just tweet pictures of us being stupid, me putting stuff up drews backside”.

This is the game, if you can think of a good name we’re looking for one.

Who said: “It’s amazing what twirling a light sabre round for a few minutes makes me feel”?

Who said: “Last night in a drunken haze, I entered a bed with a 58 year old man”?

Laurence: “That was brilliant, the best thing about is that it was our press girl’s Dad.”

Drew: “We were staying at her house, he came in and stumbled in drunk, I think he was going up to the toilet and then Blacked Out and stumbled into the bedroom.”

Laurence: “He didn’t even remember going to bed with this man. This man’s wife literally left the bed for about 5 minutes…”.

Laurence: “Kier had suddenly got into bed with husband at that exact time and Kier was woken up by her.”

It is! 3 out of 3 for the Fearless Vampire Killers!