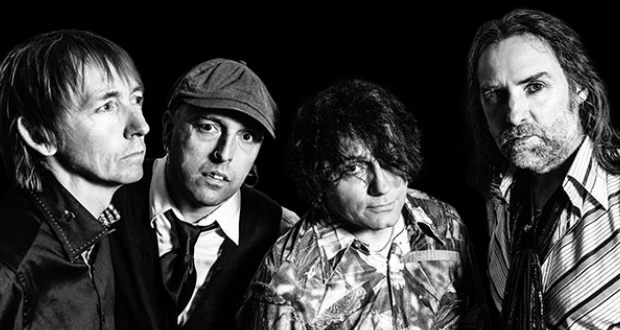 For a band who came second to  Skunk Anansie  in the Kerrang! Awards’ Best New Bands’ category and received critical acclaim in the press, Last Great Dreamers looked like they could of been the next big thing. Due to a frustrating music industry and deals not coming through, the ‘retrosexual’ Brit-rockers had to call it a day. Last September, LGD got back together for a few more gigs and to release new material.  It looks like 2015 could be their year!  We caught up with guitarist and vocalist Slyder (pictured above, far right) to talk about new music, old music and Motorhead t-shirts.

We’re here to talk about the Oxford gig and new single, are you excited?

Yeah, very! It’s the first venue we are revisiting since we reformed. We did our comeback show in London in September last year, and did a handful of other gigs around the country all in venues that were new to us. The Oxford Cellar, or Dolly as it was then known, we played many times during the 90s and Oxford was always one of our favourite gigs on the circuit so with that and it being the launch party for our new single and video it will be a special night for us.

Why come back now after 17 years?

It was just a series of coincidences really. I discovered a Facebook fan page for Silver Hearts/Last Great Dreamers, ‘Silver Hearts’ being our previous incarnation. Through this I met some old friends and band members that I had lost touch with, I saw there was still a lot interest in the band so it ignited something in me that made me want to get the band back together. I had no idea where some of the band were but I happened to bump into a mutual friend of Marc’s and  mine in London while on the trail of some missing master tapes of unreleased Last Great Dreamers songs. He told me Marc was back in the UK, he’d moved to LA some years before that  and we lost touch. After listening to the tapes again, the songs sounded so fresh and I thought we had to get this stuff out there again and get back on stage. Eventually Marc and  I got together and realized we both felt the time was right.

Do fans who have seen you in the 90s come back to your more recent gigs?

It is mostly the old fans at the moment, some of Silver Hearts era, and some who knew just Last Great Dreamers. We’re getting some fans that had our 1st album Retrosexual but never saw us live 1st time around. Hopefully we will appeal to a new audience too as we get more exposure.

What have you all been doing since we last heard from the band?

After LGD split I formed a 3-piece called Toy Eye,  later called Plan 9. I took on the lead vocal role so it was great experience to front the band. we played a lot of gigs around the capital and got some airplay on Radio 1 and XFM but it never had the same vibe as Last Great Dreamers.

Marc did some writing and recording in the States but no live work. Steve the last drummer in LGD carried on playing in various bands and will be joining us on tour in April.

You get compared to Manic Street Preachers and Mansun, who do you think you sound like the most?

I don’t really think we sound like anyone, initially we were more inspired by the ‘sleaze’ rock bands like Hanoi Rocks, Quireboys and Dogs D’Amour, bands I still love. By the time of grunge and the death of sleaze we forged our own identity,  this kind of fitted in with the whole Britpop thing. I think you can hear influences like the Manics, Blondie, Mott the Hoople, The Clash but we’ve never set out to sound like anyone apart from in those early sleaze days.

There is a bit of a 90s renaissance at the moment, and last year more ‘old’ albums sold than new material. Do you think there is a reason for this?

I think maybe people of our age are revisiting their youth, and  the music of that era. When I look at the bill at Hard Rock Hell festivals for instance there are loads of bands on that I saw when I was a kid, maybe this is rubbing off on the youth? When I look at music TV channels like Kerrang! or Scuzz I just see the same formulaic, over produced sound, it’s nothing original.

It’s great that young people are in to the music we used to listen to. I saw a car full of teenagers going down my street the other day playing Motorhead full blast, and it wasn’t just ‘Ace of Spades’, it was a track off that album, Fire Fire I think. It’s good to hear it, considering you can buy a Motorhead t-shirt in Next without even knowing who they are.  When I was a kid I was into Metal and Rock of that era but I used to listen to bands from ‘before my time’ like Hendrix, Led Zeppelin and Deep Purple, so I guess it’s nothing different now, learning the history or heritage of where it all came from.

If you could go back to the 90s when you brought out your first album, what would you different?

I don’t think I would do too much differently,  you can’t go back in time so I don’t really regret too much. For a long time we maybe tried to be what we thought the music business wanted, it became more about getting signed than making ourselves happy, so I would make decisions based on what we wanted rather than what we thought the industry wanted.

We split up because we were emotionally drained and frustrated with the whole music business. There was no fall out or anything. We had a deal with an independent label that wasn’t brilliant but then met someone at the Kerrang Awards who then became our manager. He got us out of that deal and loads of major label interest. We were about to sign a major deal but that fell through at the 11th hour. Our manager quit the business at that point, we struggled on for a bit but the disappointment, and the struggle had taken its toll on us all, so we felt together we had done all we could do.

When we did get our record deal we got a few support tours, playing decent venues and getting treated well and after having done the slog playing every toilet in the UK, sleeping on floors and in the back of a transit it was hard to think about going back to that when we had no deal and our genre of music perhaps had become unfashionable but maybe we could have continued going back to that gig circuit?

Do you go to gigs as a fan? Who have you seen recently?

As a kid I used to go to see every rock band that came to my home town. When I was in London and in the music business I went to a lot of smaller gigs and never really saw any big artists, since being out of the business and moving out to the countryside I’ve seen a lot of the classic acts again like Blondie, Morrissey, Manics, Ray Davis, Chrissie Hynde, the Damned ,The Cult and not forgetting the Dogs D’amour reunion a few years back – Redd Kross at the Borderline. All old bands though so I’d like to see more new bands as I’m a bit out of touch with the “new” rock music scene. I saw StopStop the other night in my local pub, they were a lot of fun and put on a good show.

Other than your upcoming Oxford gig, which is the launch of your new single ‘Supernature Natural’, do you have any more live appearances planned?

We have a headline tour coming up in April, there are still a few dates to be confirmed but there should be about 8 to 10 gigs covering most of England and Wales. We were hoping to get further North and up to Scotland but unfortunately that won’t happen this time so hopefully in the Autumn we’ll get up there. We’ve also been invited to play Uberpalooza/Slugfest in South Wales in July.

So does this mean you have another album in the works?

Yes, Marc and I have had a few writing sessions and have probably a dozen songs between us. We normally have an individual idea or complete song then get together to work to on them. We were hoping to get a new album ready for the Autumn but it’s looking more likely to be next Spring now. We’re planning on demoing what we have during the summer and then getting together with Tony Harris, the producer of the majority of the Crash Landing album and doing some pre-production work. From there we hope to go into the studio. We should have something new in the form of a single or EP to coincide with an Autumn tour , and follow up with our third album in the Spring. We’ve got some strong sounding songs so we can’t wait to get started on it!

Last Great Dreamers will be playing The Cellar, Oxford on February 28th to promote the launch of their new single ‘Supernatural Nature’.