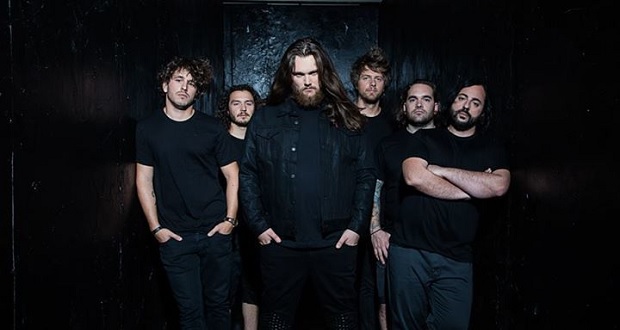 ONI certainly made their presence known while touring the UK with Devil You Know. Being the hard grafters they are, the Canadian prog-metallers wasted no time in announcing they will be supporting Children Of Bodom on a HUGE European tour. Luckily we managed to catch up with the band’s founding member and vocalist Jake Oni between their busy schedule to talk about these tours as well as working with Randy Blythe, being a proud Canadian and becoming the demon!

How did you find the UK tour with Devil You Know?

Always good to be in the UK – its like a second home for some of us. The reaction from the Devil you Know fans was super positive.

Are you looking forward to your huge European tour with Children Of Bodom?

Words can’t describe how much we are looking forward to these shows. Cant wait to bring the ONI sound to some new places. You don’t want to miss this tour. We will become your new favourite band

Do you feel in 2017, touring is more important than ever?

Yes, it is very important … for a band like ours, we are trying to build it from the ground up.We want to play as much as possible and spread the ONI word and  we love playing live and take great pride in our show.

Your name has multiple meanings – Japanese folklore, a PS2 game, etc. – what was the true inspiration for the name?

I really like Japanese folklore and from that came the name ONI. It just personifies the demon side of us and is a good representation of who we become on stage. You know, take form of the demon!

Going back to 2014, your mission was to form ‘the best band I never got to see’ – do you feel you have achieved this?

Yes, but it is a never ending and evolving process. We want to never stop growing, learning or trying to reach new heights musically and personally.

You recently released a track with Lamb Of God frontman, Randy Blythe, what was it like working with an icon of modern metal?

It was surreal experience that we learned a lot from. I hope we get to work together more in the future if schedules permit. Randy is a cool guy and he didn’t have to help us out. We are very thankful he took the time to be apart of our album Ironshore. He is in our video for “The Only Cure” – if you haven’t seen it check it out! It’s BRUTAL!!

Do you feel like proud Canadians considering what is happening in the United States and Europe?
Yeah so proud – its fucking crazy whats happening all over! Everyday seems to be something else. Come to Canada! Canada is where it’s at…

What’s next for ONI?
We are getting ready to hit the road with Children of Bodom in Europe which will be killer! Probably tour on and off for the rest of the year. Maybe start to think about the follow up to Ironshore down the line.

Since the interview, ONI have been confirmed to play the Sophie Lancaster Stage at Bloodstock Festival, which takes place at Catton Park this August. You can catch ONI on tour with Children Of Bodom in March.