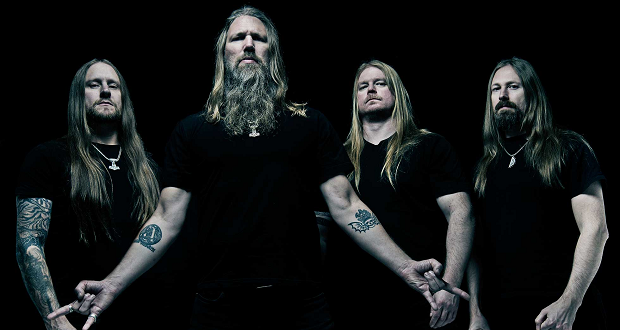 Following a storming Download set at the weekend – Swedish metal Vikings Amon Amarth have announced a UK and Ireland tour later this year.

In addition, special guests for the tour have been announced as: thrash legends Testament – who are celebrating the release of their new album ‘The Brotherhood Of The Snake’ . Joining them are Swedish rockers Grand Magus. Testament guitarist Eric Peterson commented:

“With a heart of steel and rippling distant thunder, we are honoured to board the AA Viking ship and get ready to feast and plunder with them across Europe! Thor’s hammering strikes shall lead the way! Skol!”

This follows the release of Amon Amarth’s tenth studio album ‘Jomsviking’ in March. This hit the UK album top 30, making it the highest charting album by the Swedish metal gods on British soil.

Amon Amarth had this to say about the tour:

“UK, after three years away we are returning to your lands and are bringing with us our biggest headline show ever.  Sharpen your weapons, fortify your embankments & hide your loved ones!  We are bringing our berserker party to a town near you and we hope to see you there so you can “Raise Your Horns” together with us to glory!”

Grab you viking helmet for the following live dates: