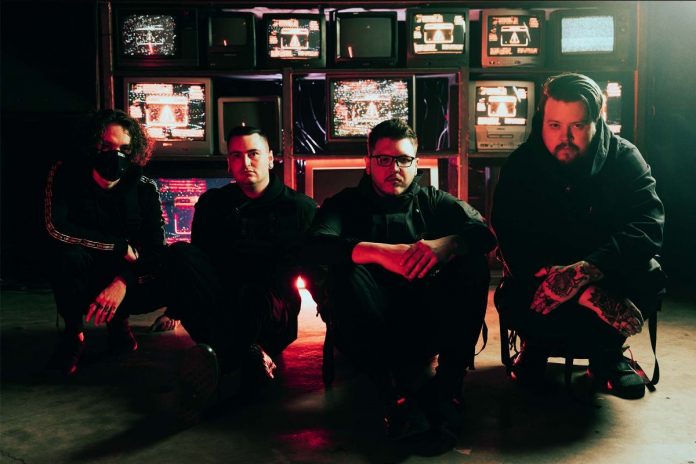 Formed in January of 2021, and initially intended as a solo/side project for one Robert Matlock, issuing ‘Void’ previously with it quickly amassing 100,000 streams across all platforms and a growing fanbase demanding new music.

By summer 2021 Matlock had completely shifted gears and started doing a lot of development and experimentation for Cantervice. Realising he had no desire to go into such an ambitious project alone, he reached out to long-time friend Tim Walker, who joined in on drums. They released a new single ‘The Machine’ in December of 2021 and shortly thereafter recruited Kris Smith on guitar, and Eric Knighton who would round out the group on bass, they then signing to FiXT in early 2022.

“FiXT is proud to add Cantervice to our roster of genre-pioneering future-rock artists. Our reputation as an artist-friendly home with industry recognized artists like Celldweller and The Anix, opened the door to working with Cantervice as they were already fans of the label and some of our roster. That led to a very synergistic convergence and we can’t wait to see where Cantervice will go in the next several years!”  said the label’s James Rhodes.

“Initially we were intent on never signing with a record label,” stated Cantervice. “With our experience and the experiences of our peers, we’ve developed a bit of a bad taste with them and wished to keep Cantervice independent indefinitely. FiXT offered us more than a simple record deal, but a partnership,” said the band, adding, “ This partnership would allow us to accelerate our output and help us spread our message further and faster than before, and without sacrificing our authenticity. This is only the beginning, and we are truly eager to find what the future holds for us and FiXT.”

Cantervice’s core concepts centre around a future dystopian world, plagued by a government that has assumed control over all technology and information. “We simply want to inspire curiosity in those who are open to questioning their reality,” comes the telling statement.

You can purchase/stream the singles here and here and check out videos for both here at RAMzine.