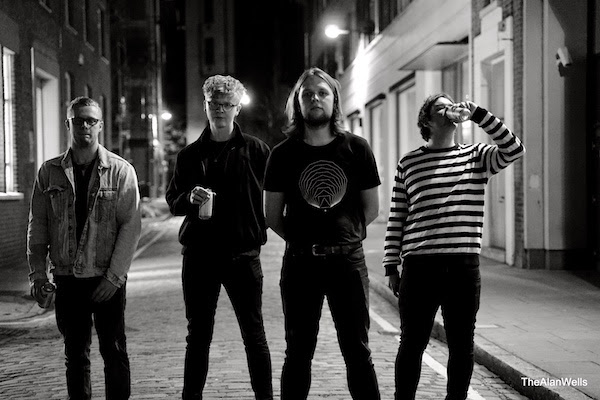 Despite starting the band to write and record one song that they could cherish forever, it is safe to say that the band’s success has snowballed since their inception in 2017.

Taking their music from local pubs in London, to the Isle of Wight Festival, to venues across the UK and even overseas to Gibraltar and Spain – word of the band’s spirited songs and vigorous live shows has spread on an international level and the band is currently creating waves with their version of blistering indie rock and roll, and either side of the pandemic packing venues inside the capital with their live shows.

The new EP captures themes of love, longing, pain, happiness, and escapism, told through soaring vocals and screaming guitars. With infectious rhythms and heartfelt, patient melodies, Swallow The Weekend aims to encapsulate the emotions that come with loving and living.

Cavalcade has presented four naked, honest, and soul-exposing songs that combine loving and living, into a pill to be swallowed.

‘Dreaming About’ offers a personal perspective on the lessons learned and the priceless experiences gained from a time spent with a person you loved. Despite being reflective and patient lyrically, the song is fast and ferocious from start to finish to emphasise the turbulent mind caused by the breakdown of a relationship.

Lead singer Connor Duggan commented: “‘Dreaming About’ was born out of a recognition of just how much two people can learn in a relationship. There are frustrations and longings that come from that reflection which brings an understanding that there are things that have irreversibly changed along the way.”

You can still order ‘Dreaming About’ here.

Their previous single, ‘Feels Like Home’, is about where comfort is. For Cavalcade, this is being on stage. It’s being out all night until the sun comes up and the feeling of sharing those moments with the people you love. In a period where we feel as though we haven’t been able to return home, this song is a remedy to that.

The lyrics in the verses of this song are based around William Gibson’s novel The Neuromancer. The protagonist Case is a cyberspace cowboy, who is poisoned when a job goes wrong and is prevented from entering the matrix ever again. In the novel, he longs to escape from reality, and for the band this embodies the message ‘Feels Like Home’. In their opinion, music and partying are our escapes – it’s where home is.

You can still order ‘Feels Like Home’ here, and watch the video to both singles right here right here at RAMzine.

The actual EP, Swallow The Weekend can be pre-ordered/added/saved here and you can also listen to Cavalcade on Spotify.