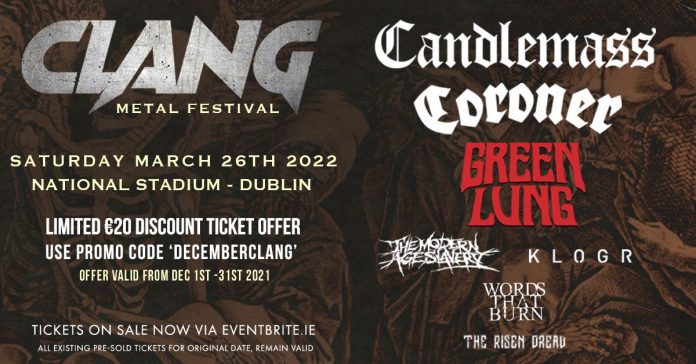 A new heavy metal music festival is to be held on Saturday March 26th 2022 in the National Stadium in Dublin, Ireland, and going out under the banner of the Clang Metal Festival.

This all-day event will see doom titans, Candlemass make their long-awaited return to Irish shores where they will be performing classics from their 1986 iconic Epicus Doomicus Metallicus, as well as material from their latest full-length studio album, The Door To Doom, and most recent, Pendulum EP.

Having welcomed back original frontman Johan Längqvist, on their new album/EP, the band are gearing up for their long-awaited return to Ireland, and Längqvist’s first.

Having formed in 1983 in their hometown of Zürich, the band released five albums and a semi-compilation over a period of eight years – from the unpolished and technical speed of 1987’s R.I.P; the complexity of 1988’s Punishment For Decadence, the technical quality of 1989’s No More Color and its derivative Mental Vortex from 1991, to the heavier and more laidback style of Grin – the band progressed consistently, without ever losing their identity. Having disbanded in 1996 they reformed in 2011, and are reportedly working on a new studio album, due for release next year.

Also making their Irish debut is rising purveyors of doom, Green Lung, who have recently released the follow-up to their hugely successful, Woodland Rites LP with the critically acclaimed Black Harvest. The UK five-piece have been gaining a tremendous amount of recognition from around the globe, thanks to their ability to craft monumental riff-filled anthems that pack a serious punch in the lower intestine.

Commenting on their inclusion to the festival and performing in Ireland for the very first time, vocalist Tom Templar said: “We’ve been wanting to make it over to Ireland for years now and to be able to make our debut alongside legends like Candlemass and Coroner is a dream come true. We look forward to letting the Devil into Dublin in 2022.”

Joining the line-up for another Irish debut performance is Italian death metal crew The Modern Age Slavery who draw their influences from the likes of Whitechapel, Job For A Cowboy, etc. Formed in 2007, they soon gained acclaim due to their ferocious 2008 debut album Damned To Blindness on Napalm Records.

Alternative Italian/American Metal crew, Klogr will be bringing their hybrid of progressive and alternative rock to the National Stadium, and closing off the bill will be rising Irish Alt-Metalcore five-piece, Words That Burn, who had smashed their UK debut at this year’s Bloodstock Open Air Festival in August, and will be performing new tracks from their soon-to-be-released new album. Rounding off the bill will be The Risen Dread, a Brazilian/Irish metal collective whose recent single ‘White Night’ features Sepultura shredder, Andreas Kisser, with the follow-up ‘Sound Of The Unknown’ out now.

Tickets for Clang Metal Festival are on sale NOW via Eventbrite from €64.90 (including the booking fee). However, if you use ‘DecemberClang’ there’s a €20 discount offer this December only.

Get tickets here and for more information go here.