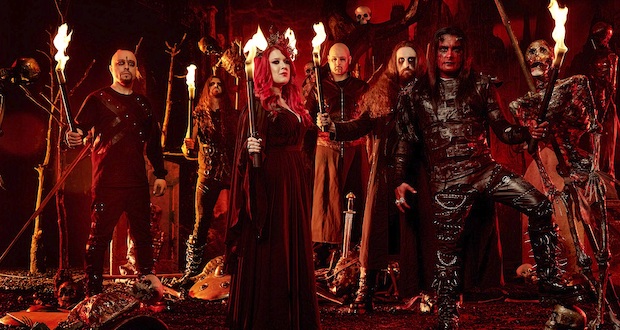 Suffolk goth icons Cradle Of Filth have just announced the release date for their upcoming album, Existence Is Futile, on October 22nd 2021.

The first single from the album is ‘Crawling King Chaos’ which you can watch below:

The album was recorded at Grindstone Studios and produced by Scott Atkins, who has previously worked with Vader, Benediction, and Devilment in the past.

Front-man Dani Filth had this to say about Existence Is Futile:

“The album is about existentialism, existential dread and fear of the unknown, The concept wasn’t created by the pandemic. We’d written it long before that began, but the pandemic is the tip of the cotton-bud as far as the way the world is headed, you know? I guess the title, Existence Is Futile, does sound a little morbid. But again, it’s more about recognising that truth and saying that everything is permitted because nothing really matters, which mimics the occultist Aleister Crowley’s maxim. We all know we’re going to die, so we might as well indulge life while we possess it.“

Iconic horror star Doug Bradley, who is best known for playing ‘Pinhead’ in the Hellraiser franchise of movies, appears on the album. Lending his voice to COF’s most politically astute track to date ‘Suffer Our Dominion’, as well as bonus track ‘Sisters Of The Mist’ which is part of the ‘Her Ghost In The Fog’ trilogy which had spanned over 20 years.

Existence Is Futile is available to preorder as of today via this link. Ha’way lads and lasses, get some metal doon yas.

01  The Fate Of The World On Our Shoulders
02  Existential Terror
03  Necromantic Fantasies
04  Crawling King Chaos
05  Here Comes A Candle… (Infernal Lullaby)
06  Black Smoke Curling From The Lips Of War
07  Discourse Between A Man And His Soul
08  The Dying Of The Embers
09  Ashen Mortality
10  How Many Tears To Nurture A Rose?
11  Suffer Our Dominion
12  Us, Dark, Invincible
–  Sisters Of The Mist (Bonus track)
–  Unleash The Hellion (Bonus track)