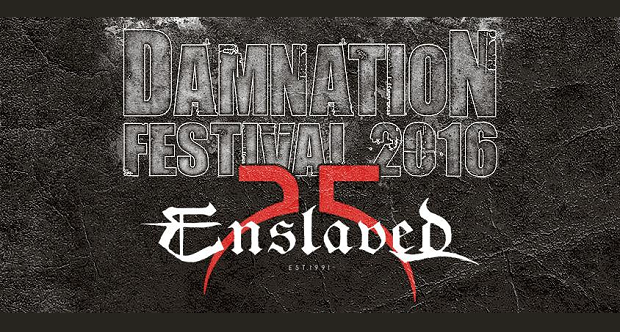 Damnation Festival Is heading into its 12th year as an all day festival, and still it is able to pull out the finest of announcements even after all these years. Finally, after the hangovers and sore heads of Novembers Damnation Festival has cleared, we are able to look ahead to this years and have been rewarded with 5 bands of the 27 band strong line up.

The first name out the box are a band celebrating the 25th year in action together, Norwegian metal legends Enslaved will be marking their appearance with a special ‘Spinning Wheel Ritual’ show at the festival. Taking the time to talk about the announcement, Enslaved had this to say:

“It is with great pride we announce our first ever appearance at Damnation Festival. The festival has become a well-known name for bands, and now it is finally time for us to show its audience what we are about. We’re only just back from a magic weekend in London; London By Norse was nothing short of unbelievable! We hope to see those who attended, and many more, at Damnation Festival – our only UK appearance for the rest of 2016. Be there and let’s all be damned.”

Nails spoke out about their appearance: “Damnation Festival is only one day, but it is all quality.

“Short and Sweet – similar to our focus with Nails – this is why we feel attracted to the event and we’re proud and honoured that Damnation Festival will mark first appearance on UK soil since the release of our new album, ‘You Will Never Be One Of Us’.”

Gavin Medicinally, the Festival Director has also said a few words on the most special of day festivals: “Since 2005, we’ve consistently delivered solid and diverse line-ups which make a mockery of our ticket price and this year we want to go one further by booking challenging bills across our four stages, starting with five bands who’ve never played Damnation Festival before. Enslaved, Nails, Ne Obliviscaris, Full of Hell and Oceans of Slumber are the first taste of what’s to come in 2016, from hateful grind to hauntingly melodic prog and fans can expect much more over the coming months, with 22 bands still to be announced.”

Damnation Festival 2016 will be taking place once again at Leeds University Union on November 5th. With 27 bands spread across 4 stages through the day, and with arguably the best value for money with any UK show with tickets costing on £38. It is no surprise that Damnation has found itself celebrating its 12th year.