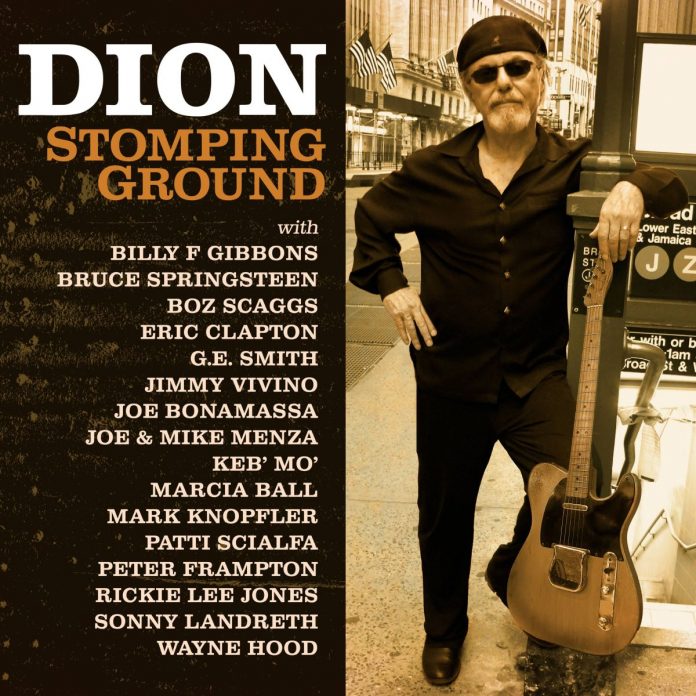 Dion is following up his critically acclaimed and commercially successful 2020 album release Blues With Friends with Stomping Ground, a new album that finds him collaborating yet again with music greats with whom he shares mutual admiration.

Set for release on Friday 5th November, Stomping Ground was produced by Wayne Hoodwith Dion and will be released through KTBA Records. The album will be available digitally as well as on CD and as a two-LP vinyl set and can be pre-ordered here.

The album was preceded last month with the release of ‘I’ve Got To Get To You’, a track featuring Boz Scaggs along with the father and son guitar team of Joe and Mike Menza.  It is now followed by the release of ‘Take It Back’with Joe Bonamassa guesting – you can watch the official music video right here at RAMzine.

Next month, will see the release of ‘Angel In The Alleyway’ that features Patti Scialfa(vocals) and Bruce Springsteen (guitar and harmonica).

The aforementioned album’s notes featuring a foreword by Pete Townshend, read, in part:

“Dion, like a circling star that never fades, generates the energy and fire we need to pull ourselves up and start again.  Dion is a star who knows well how to start again, how to keep shining.  He looks at his watch every few years. Damn, let’s make a record!  Take care. This one will blow those little white things in our ears right into your brain.”

Beyond Townshend’s literary contribution, Dion provides a track-by-track description of all the album’s 14 selections, the sole non-original being‘Red House’,the Jimi Hendrix song that has become a blues standard. On Stomping Ground, Dion is joined by Keb’ Mo’on that song.  Dion noted, “We had a blast grooving on ‘Red House’.  I’m honoured to have him join me on this Jimi Hendrix cover/tribute.  We did it as only we could. I think Jimi would approve!”  It’s worth mentioning that the follow-up single release to Dion’s 1968 smash hit ‘Abraham, Martin and John’ was ‘Purple Haze’, serving to underscore the connection that Dion has long had with the legacy of Jimi Hendrix.

There’s more Dion news. The Wanderer, a musical based on the life and music of Dion will stage its world pre-Broadway premiere at the Paper Mill Playhouse in Millburn, New Jerseyon March 24, 2022.  Michael Wartella (Wicked) stars as Dion, alongside Christy Altomare (Anastasia) as Susan, Dion’s wife. Original New Kids On The Block member Joey McIntyre (Waitress) plays Johnny, Dion’s best friend.  The Wanderer was written by Charles Messina (A Room Of My Own) and directed by Kenneth Ferrone (Cruel Intentions) and choreographed by Sarah O’Gleby. Tony Award-winner Beowulf Boritt is the scenic designer. The Wanderer is produced by Paper Mill Playhouse in association with Jill Menza and Charles Messina.

Stomping Ground’s track listing for the vinyl version is as follows, and the CD version follows the same order:

Side A: ‘Take It Back’ with Joe Bonamassa, ‘Hey Diddle Diddle’ with G.E. Smith, ‘Dancing Girl’ with Mark Knopfler, ‘If You Wanna Rock ‘n’ Roll’ with Eric Clapton.

Side B:  ‘There Was A Time’ with Peter Frampton, ‘Cryin’ Shame’ with Sonny Landreth, ‘The Night Is Young’ with Joe Menza and Wayne Hood.

Side C: ‘That’s What The Doctor Said’ with Steve Conn,  ‘My Stomping Ground’ with Billy F Gibbons, ‘Angel In the Alleyways’ with Patti Scialfa and Bruce Springsteen.

Side D: ‘I’ve Got To Get To You’ with Boz Scaggs, Joe Menza and Mike Menza, ‘Red House’ with Keb’ Mo’, ‘I Got My Eyes On You Baby’ with Marcia Ball and Jimmy Vivino, ‘I’ve Been Watching’ with Rickie Lee Jones and Wayne Hood.