Gama Bomb Speed Between The Lines 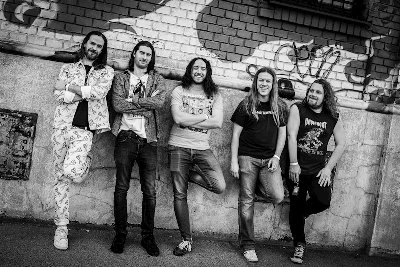 Speed Between The Lines is the sixth studio album from the band in 16 years, and features Philly Byrne (Vocals), Domo Dixon and John Roche (Lead guitars), Joe McGuigan (Bass And vocals) and Paul Caffrey (Drums). It has been described as “Putting the fast, fabulous and fun back into old school thrash metal and dragging it kicking and screaming into [the] present day”.

“Our aim with this record was keep refining the Gama Bomb thrash formula,” noted bass player McGuigan “It’s got faster and more punky riffing, battling axes and catchy, memorable choruses from Philly, who’s back with the Halford/Belladona notes after injuring his voice a few years back.”

“The title just popped into my head one night,” singer Byrne said of the album “I’d been listening to a lot of 50s rock and doo-wop, songs like ‘Sixteen Candles’ and ‘Sweet Little Sixteen’, and it just kinda morphed into this idea: what if somebody wrote a satanic teen rebellion song?”

Speed Between The Lines features the songs ‘Give Me Leather’, ‘A Hanging’, ‘666teen’, ‘Bring Out The Monster’, ‘R.I.P. U’, ‘Motorgeist, Alt-Reich’, ‘Stay Rotten’, ‘We R Going 2 Eat U’, ‘Kurt Russell’, ‘World Gone To Hell’ and ‘Faceblaster’. The record was produced by longtime Gama Bomb Scott Atkins (Cradle of Filth, Sylosis). The album’s retro cover art was by New York-based artist Jarred Hageman AKA Chrome And Lightning and Rory McGuigan (Villagers).