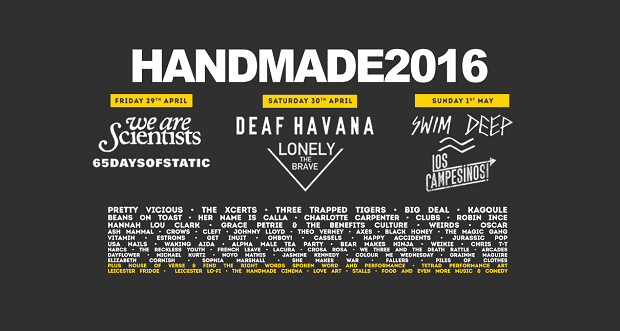 Handmade Festival 2016 set to take place at the end of April in Leicester has made the announcement of the final acts to join the 3 day weekend from April 29th to May 1st.

With less than a month to go, that brings the full line up of bands released, along side music performances you can also find other forms of entertainment including comedy, art, performance art and photography.

Headlining the music side of the 3 day event are the likes of We are Scientists, Deaf Havana and Swim Deep. With main supports slots from 65 Days of Static, Lonely the Brave and Los Campinos! Along side a whole host of other varied acts, it’ll be hard to not find something to enjoy.

With weekend tickets costing only £40, and now entering its fourth event, Handmade Festival is the definition if an independent festival. Everything is completely hand-picked and designed to bring the new, freshest and most original of the arts to the city, originating from the mind of John Helps (Maybeshewill), it has grown and developed into something much more. With more than just a great team behind it, partnerships grew with the likes of Big Scary Monsters and Alcopop Records, and the great ArcTanGent Festival.

2015 saw the last Handmade Festival grow and step up in regards to venue requirements, taking over the O2 Academy for the first time, which it will yet again this year. With a weekend ticket so cheap and a line up so eclectic, there really is no reason to spend your bank holiday weekend anywhere else!