Recorded at Superfly Studios, it is the band’s first album of new material since 2015’s multi-award winning Reaching For The Light and features the new single ‘(She Don’t) Give Me No Lovin’’ that was mixed by Chris Sheldon (Foo Fighters, Feeder and Therapy).

“Exile & Grace definitely has a rockier feel and sound to it.”  Said King King’s frontman and guitarist Alan Nimmo. “We are following our influences from the classic rock genre, Bad Company, Whitesnake and Thunder. We really set out to challenge ourselves with this album. We’ve stepped up the quality of songwriting and pushed ourselves physically in both performance and delivery!” 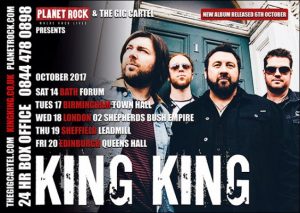