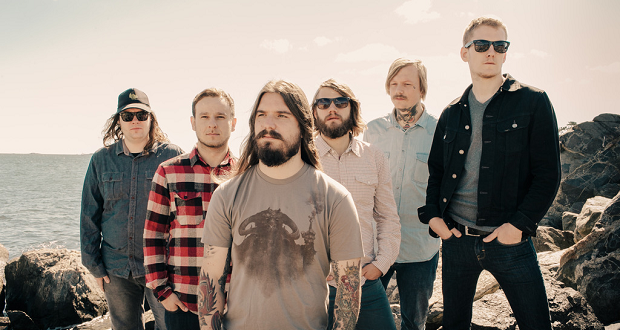 Kvelertak have made a huge noise since breaking into the big leagues, and now the Norwegian punk ‘n’ rollers return on form with their brand new single ‘1985‘, out now.

Living up to their name Kvelertak (Norwegian for ‘chokehold’), they have proved a chokehold of their on in the scene, and their grip looks to tighten as ‘1985′ comes from the explosive, upcoming new album ‘Nattesferd’ which is expected to fly off of shelves on release, May 13th via Roadrunner Records.

Rolling Stone magazine has already named ‘Nattesferd’ in their Top 25 Most Anticipated Albums of 2016 list, which is by no means a difficult list to get onto, further building the on the bands already brilliant name. Having already hit the #2 spot on the Rolling Stones Album of the Year 2013 list with ‘Meir’. Aside from the amazing accolades from Rolling Stone, Kvelertak have had huge success in their homeland of Norway, finding the #1 spot, achieving gold certification and gaining two Spellemann Awards which are the Norwegian equivalent the Grammys.

Kvelertak will be returning to UK shore this year, with festival appearances at both Reading and Leeds festival, and a further UK tour expected in the near future too. Having graced stages with some of metals finest of headline acts including Mastodon, Slayer, Anthrax, Gojira, and least of all shared stadiums with the likes of Kiss and Avenged Sevenfold. It will be no surprise the this years UK performances will be something of the highest quality, it is no wonder they have found themselves being loved and lauded by the finest, included James Hetfield, and even the Crown Prince Haakon of Norway, Norway’s heir to the throne!