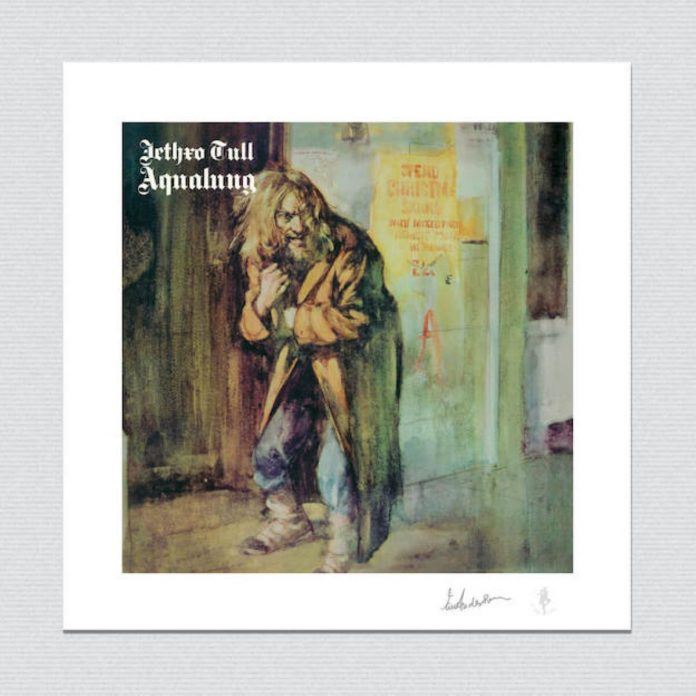 First to be released is the ground-breaking and iconic Aqualung album cover from 1971. Printed in two large format sizes, 24” square (signed edition of 350 @ £120) and 28” square (signed edition  of 150 @ £175). The prints are gallery quality giclées printed on 100% cotton rag archival paper stock and will all come numbered and signed by Ian Anderson and embossed with a Jethro Tull stamp.

The first 14 studio album cover art prints can also be purchased together in a Super Deluxe custom-made box with two bonus prints. All prints in the deluxe set are number-matched, signed by Anderson and each print is embossed with a unique Collectors Edition JT stamp. The Deluxe Boxes are handmade and only 75 of these box sets are being made available to purchase worldwide (at £1,800).

The Aqualung print and the Super Deluxe box set are available for pre-order now and will be shipping from June.

These will be followed in Autumn by another four releases – Thick As A Brick – That celebrates its UK 50th anniversary release this year, and the band’s first three albums, This Was, Stand Up and Benefit.  All four will again be released as signed limited edition art prints.

The Jethro Tull album artwork came about in many ways. The first four album covers were commissioned and paid for by Chrysalis Records (now Warner Music Group) with subsequent cover concepts from Ian Anderson being commissioned from various artists, photographers, and   designers. All copyrights for these prints are owned by Warner Music Group.

For more details, updates, and to purchase items you are advised to visit the website jethrotullart.com and you can watch a related video right here at RAMzine.