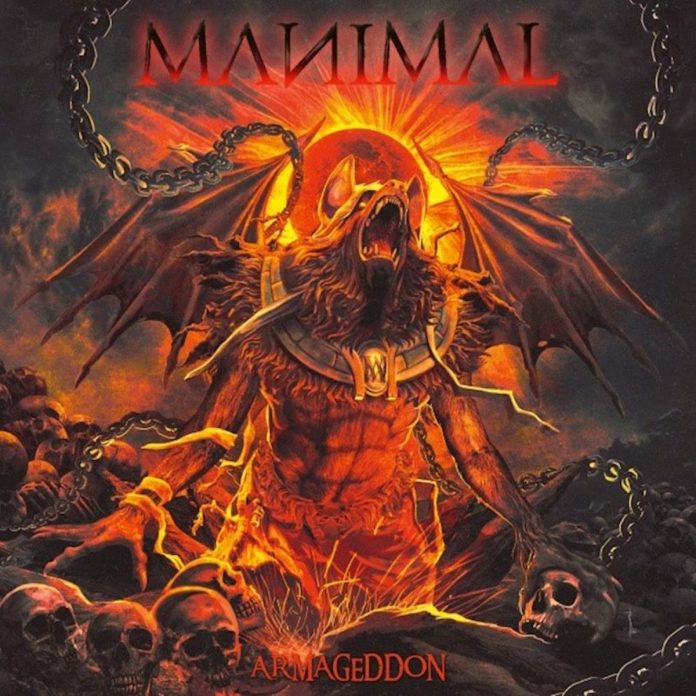 Three years since their last album, Purgatorio, Gothenburg metal force Manimal has announced the release of a brand-new studio record this Autumn. Titled Armageddon, it is now slated for a release on 3rd December through AFM Records.

Ahead of that arives their latest single,‘Chains Of Fury‘, that comes armed with its own offical video that you can watch right here at RAMzine.

“I think this one stands out a bit from the rest of the songs on the album,” said singer Samuel Nyman. “It has this grinding, almost hypnotising groove and it’s probably one of the heaviest tracks we’ve ever released. And the message it brings is clear – Break loose from your chains of fury!

“Once again we’ve been working with the much talented Andy Pilkington of Very Metal Art to visualise the song and I think he has really managed to capture the very core of the song this time as well.”

Tracks featured are ‘Burn In Hell’, ‘Armageddon’, ‘Slaves Of Babylon’, ‘Forged In Metal’, ‘Chains Of Fury’, ‘Evil Soul’, ‘Path To The Unknown’, ‘Master Of Pain’, ‘Insanity’ and ‘The Inevitable End’. Armageddon, that was mixed by the band’s bassist Kenny Boufadene at his Studio Meltdown in Sweden.

Previous singles from the album were Burn In Hell‘, ‘Armageddon‘, ‘The Inevitable End’ and ‘Forged In Metal‘, released earlier this year, and you can also watch official videos for them right here at RAMzine.

‘The Inevitable End’ represents the more melodic side of Manimal, according to lead vocalist Samuel Nyman, “with strong harmonies and a catchy chorus.”  The rest of the band being Henrik Stenroos – Guitars and André Holmqvist – Drums.

The evolution between Armageddon and their first album, The Darkest Room, released back in 2009 shows song-writing that is “tighter, stronger and bolder” with a style that should suit both the old school and modern metal fan. However, Nyman doesn’t believe the band be tagged easily stylistically.

“We are more than power metal. It was our label that put Manimal into the power metal category with our first album, and we understand that completely because they had to put us in a genre to guide people. Power metal for me are bands like Helloween, Gamma Ray and Stratovarius; they have more up-tempo songs, more vocal harmonies. Sure, Manimal does have power metal elements but we’re not pure power metal. There is more to us than that and I think the new album is perfect example of that.”

The song-writing for Armageddon was once again headed up by Stenroos, considered by his bandmates to be the musical mastermind behind Manimal – The guitarist listens to all different types of music and because of that colourful musical palette, according to Nyman, “He boils it down and gets his own ideas, trying to create something he likes himself.”

With a solid riff-oriented approach, the material Stenroos presented to the rest of the band for Armageddon were actual songs rather than just ideas. As with their three previous records, the quartet worked together fleshing the songs into their final form. “The vocals harmonies Henrik gives me are played with the guitar,” said Nyman, continuing: “We have been making music together for so many years now that I can almost hear by the way he’s playing how he wants me to deliver the vocals. It’s not very often that we disagree in the song-writing process.

”I’m really proud we’ve managed to create yet another great album together,” Stenroos added. “And it’s been a team effort. All four of us have put so much soul and effort into everything from song writing to recording, with the result of a really heavy and all through awesome sounding album without any fillers what so ever. The fans of our previous works will not be disappointed.”

Armageddon will be available on vinyl, CD and on digital formats and can be pre-ordered here.