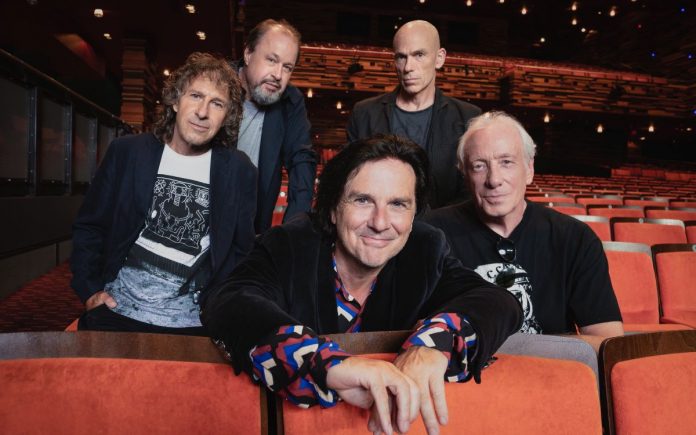 Ever the pioneers in the development of crowdfunding and fan-funded music, progressive rock group Marillion, has now come up with a unique way to solve the problem of not being able to buy pandemic insurance ahead of their UK tour.

The band has already invested more than £150,000 on preparations for the 10-date The Light at The End Of The Tunnel YK tout, but risk losing it all if just one of the band members was forced to isolate with covid.

It’s not simply that the tour would be cancelled, but the group would have to honour payments for lighting, trucks, tour buses and crew. This would be on top of not receiving any money from any remaining gigs that had not been played.

“The band has not played live since the pandemic began, and to lose such a huge amount of money would be absolutely devastating,” explained their manager, Lucy Jordache. “We tried to get the tour insured, but it has proved impossible. No companies want to take the risk.”

Thus, Jordache and the band have come up with a revolutionary way of keeping the show on the road. The first to use crowdfunding back in 1997, Marillion, will now appeal to their massive worldwide fanbase to join forces and become their insurers for the upcoming tour.

As the manager explained: “We’re calling it Lightsavers as the tour is called The Light At The End Of The Tunnel. We’re asking our fans to pledge money that will be held in escrow and if it all goes covid free it will be returned to them at the end of the tour. But if we do have to cancel, then their money will be used to pay the bands unavoidable expenses.”

However, all would not be lost for the loyal fans. Regardless of whether their money is eventually returned or not, every person who donates will receive “money can’t buy” items in return.

Depending on the amount donated, this could be anything from seeing your name in a tour programme, or a free download of a gig, to a group chat or even a personal meeting with the band via Zoom.

They will also be entered for a raffle with prizes such as a handwritten lyric of their choice, a full set of guitar plectrums, and personal shout-outs at concerts.

Marillion frontman, Steve Hogarth, believes fans will be only too happy to help them out.

“We are blessed with having the most amazing fans. They are incredibly supportive and loyal. We are desperate to play in front of those wonderful crowds again and I know they are so excited to see us,” explained the singer.

“They have come to our rescue before. Way back in 1997, they helped raise $60,000 to underwrite our entire US tour. It was the first noteworthy instance of online crowdfunding – A world first in fact. We also used the same method to underwrite some of our studio albums.”

Hogarth said the pandemic had been “absolutely devastating” for the music industry and everyone was now desperate to return to normality.

“Like so many other bands, we’ve been in deep freeze for the last 18 months and it’s been incredibly frustrating. It has been a dark time of course for everyone but now there is, indeed, light at the end of the tunnel, and we need our Lightsavers to ensure we reach there,” added Hogarth.

Marillion’s tour begins at Hull’s City Hall on 14th November. For a full list of dates and venues click here.