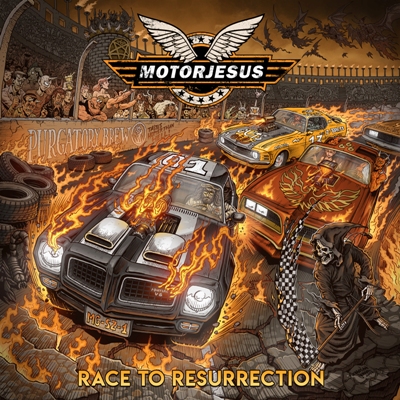 Its been four long years since Mönchengladbach’s Motorjesus rose up the German rock charts with their Electric Revelation album, now with line-up tweaks fine-tuned the gasoline rockers are preparing for the release of their fifth long player Race To Resurrection on 15th June through Drakkar Entertainment.

But now Motorjesus want fans to hear their new sounds, having already released a single and two lyric videos from Race To Resurrection.  ‘King Collider‘ is the debut single and you can watch the accompanying video here at Ramzine.

As with its predecessor, Race To Resurrection   has been produced by Dan Swanö, who declared: “Motorjesus are back with a vengeance and bunch of killer tracks to make your engines roar! If you like their previous stuff, you surely won’t be disappointed! Motorjesus are here to stay!”

Race To Resurrection  is said to be even more rounded, more balanced and much more diverse than previous offerings, or as their vocalist said: “Let me put it this way: the vehicle’s still the same,but we’ve done some fine tuning to make sure that it wins the upcoming races.”

Other tracks featured on Race To Resurrection are: ‘Tales From The Wrecking Ball’, ‘Re-Ignite’, ‘Speedway Sanctuary’, ‘Casket Days’, ‘The Infernal’, ‘Burning Black’, ‘The Damage’, ‘The Storm’, ‘Engines Of War’, ‘The Chase’, ‘Running Out Of Time’ and ‘Awaken The Tyrants’ with the lyric video for ‘Re-Ignite’ also featured here at Ramzine.