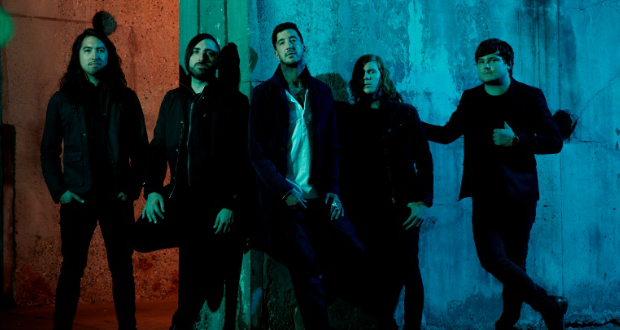 Good news for fans of hardcore giants Of Mice & Men. We can reveal that OMAM are set to re-release well received studio album ‘Restoring Force‘ which dropped last year and generated impressive ratings on the album charts. This new release will be available from February 23rd – a special re-issue that includes three new brand new songs and an unfamiliar acoustic rendition of ‘Feels Like Forever‘.
To supplement this release and to satisfy us until then, they have also unveiled the video to one these new tracks, ‘Broken Generation‘.
Since the release of their debut back in 2010, the boys from California have continued to throw down a gnarly blend of hardcore and melodic rock. Recently they have toured with Linkin Park, inevitably a great a platform to extend their growing fan base.
OMAM are now preparing to bring the noise with a huge run of headline shows in the next couple of months, if you want to check in to a thunderous show, catch them at the following venues:
March 26 – O2 Guildhall/Southampton, UK
March 27 – O2 Academy/Bristol, UK
March 28 – O2 Brixton Academy/London, UK
March 30 – Barrowlands/Glasgow, UK
March 31 – O2 Academy/Newcastle, UK
April 2 – Rock City/Nottingham, UK
April 3 – O2 Academy/Birmingham, UK
April 4 – Academy/Manchester, UK
Share
Facebook
Twitter
Pinterest
Linkedin
Email
Print
Mix
Previous articleDecapitated Announce exclusive UK appearance at UK Techfest
Next articleReview: Bowling for Soup – Songs that people actually liked