Prophets Of Addiction – Nothing but the Truth 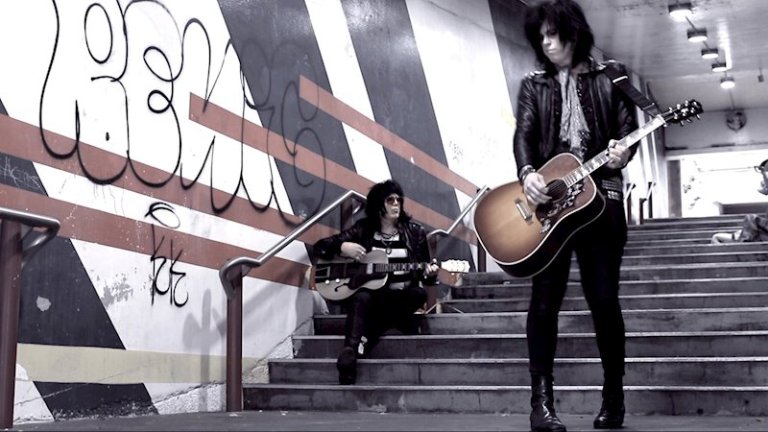 Hollywood glam/punk n’ roll outfit Prophets Of Addiction release an unplugged record for their third full length album, Nothing but the Truth available through HiVolMusic.

The decision to make an entirely acoustic album arose when drummer Wayne Stokely too seriously ill, eventually being diagnosed with multiple sclerosis. “We were devastated, of course, and decided to put off the planned full band rock record and G.G. and I decided to do the Nothing But The Truth album with just the two of us while we wait for Wayne to return to form,” commented frontman Lesli Sanders.

With the aforementioned G.G. on guitars and backing vocals, Sanders himself on lead vocals, guitars, keyboards, piano and acting as producer the ten raw and dirty acoustic tracks were mixed and mastered by Phil Soussan of Ozzy Osbourne and Billy Idol fame who they’ve worked with before.

Raised on a diet of anti-conventional acts such as The Ramones, Hanoi Rocks, Bowie, New York Dolls, Sweet, MC5, The Dead Boys and Lords Of The New Church, Prophets Of Addiction unabashedly wear their influences on their collective sleeves. “I loved the concept of a band” said Sanders. “A team of brothers making music, making life, and living it as if nothing else mattered. Never trying to be something other than what you are and what you are was just so cool.” Which explains why it was hard sidestepping from a full-on rock record with Stokely being unavailable.

However, the band’s overcome troubles in the past. Matters that can be found within their lyrics. ‘Babylon Boulevard’ taken from the Nothing But The Truth album as their new single being a prime example. It tells the story of an adventure in that modern day Babylon that is Hollywood wherein what starts as innocent fun quickly turn into a one way street on a dead-end drive. As the saying goers: it’s easy to check in but not always so easy to check out.