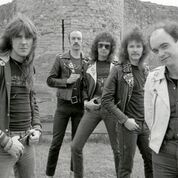 Heavy metal legends Saxon seal their reputation by reissuing their first three albums – Saxon, Wheels of Steel and Strong Arm Of The Law on May 30th. They will be available both on vinyl (coloured splatter/swirl vinyl) and CD versions that will feature 24 page media books containing original lyrics, rare photos and memorabilia.

Changing their name from Son Of A Bitch to Saxon, the band became one of the pioneers of the New Wave Of British Heavy Metal back in the late 70s-80s, with hit albums and singles alike, continuing to find favour on mainland Europe as the music scene shift and returning as heroes in the last decade delivering successful hit albums like their most recent, Thunderbolt.

On 21st May 1979, Saxon released their self-titled debut album through French record label Carrere. Produced by former Argent guitarist John Verity, it featured early progressive and glam rock influences amid the rawer new sound of NWOBHM emerging. It shows a band in transition and while the label failed to promote the record, adequately their strong live act and key songs from the album began drawing rockers’ attention. The versions to be re-released will includes early demo from when they were Son Of A Bitch, early BBC session tracks and live songs from the inaugural Monsters of Rock festival, as headlined by Rainbow, Saxon having just toured the UK with them. 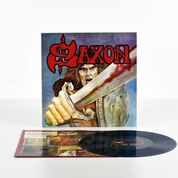 With added experience, enthusiasm and a willing audience on board, Saxon released Wheels Of Steel in 1980. The album went gold in the UK and both ‘747 (Strangers In The Night)’ and ‘Wheels Of Steel’ hit the UK’s hit singles top 40, back when 7”hits actually meant something. Now hailed as a heavy metal classic album the new version will includes rare demos and live tracks from the inaugural Monsters Of Rock Festival, held at Castle Donington in 1980. 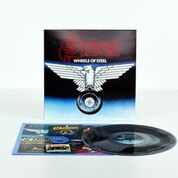 Six months later, Saxon brought out Strong Arm Of The Law and the band looked unstoppable, and as with all these records tracks would be part of the band’s live set for decades later. The version to be released additionally features a BBC session, remixes and early demos. 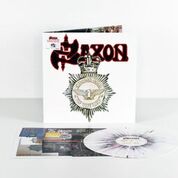 These Saxon albums are available for pre-sale by clicking here.