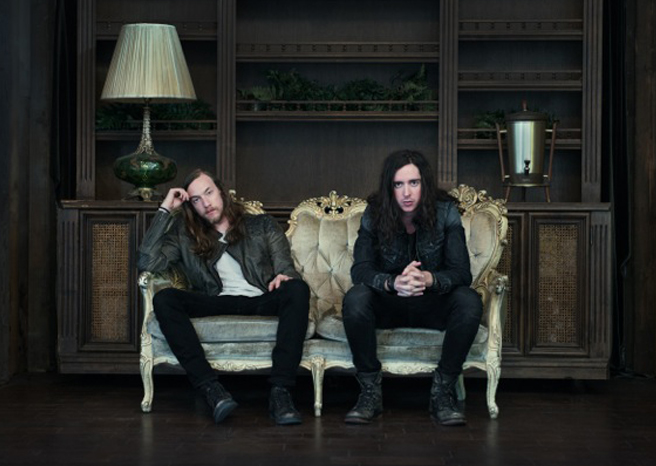 Sleepwave new video for ‘The Wolf’

Sleepwave , a new band formed from former Underøath singer Spencer Chamberlain, featuring band mate Stephen Bowman. They have just released a new video for their track ‘The Wolf” featuring live footage from the band’s current tour with Nothing More. Watch it now:

Sleepwave are also set to release their debut album ‘Broken Compass’ on September 15th via Epitaph Records. ‘Broken Compass’ is said to deliver the dirty dark side of electronica through the lens of classic song structure and melody.

‘Broken Compass’, the Florida based band’s debut album, speaks truth to power by bucking trends and digging deeply with a creative determination all too lacking today. A Sleepwave show is full of spit, snot, bile and vibrant redemption, performed by the core duo of Spencer Chamberlain and Stephen Bowman (and various live collaborators) with purpose and meaning. Compared to the camera-ready prima donnas around them, these guys look like they slept in a gas station and they sound like the pop apocalypse.

Chamberlain states, “People ask me all the time why I didn’t just do a new band that sounds like Underøath. It would be easy to do that. But I wanted to do something that’s not out there right now that needs to be out there again….Not everyone will love Sleepwave. But nobody will be able to leave a Sleepwave show saying we phoned it in.”

Sleepwave are on tour in the US with Nothing More. The band were recently invited to join Bring Me The Horizon on their forthcoming show at London’s Wembley Arena on December 5th. Tickets are on sale now from ticketmaster.co.uk /livenation.co.uk