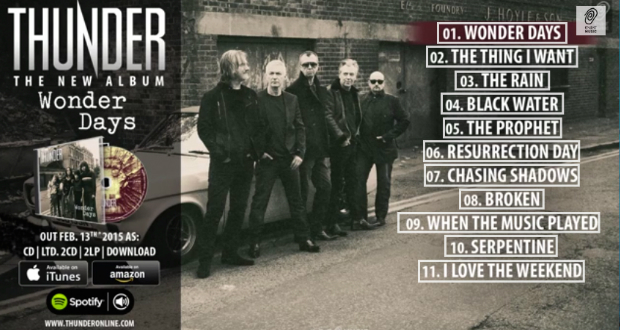 Rock and Roll baby! Is what I thought when I listened to the below album sampler. Multi-platinum band, Thunder are one of those authentic Class Rock bands, they promote that exciting Rock and Roll atmosphere that is hard for bands not of the ear to re-create. Danny Bowes (Vocals), and Luke Morley (Guitars) have been playing together since the 70’s, and the band formed in the late 80’s.

Thunder have just announced a string of in-store signings, to promote their album ‘Wonder Days’ which they will release on Monday. This is a chance to see Thunder in a small-scale imitate environment, which is a rarity.

The band resume full sized electric rock action in March with their arena shows (dates below). Shortly after this you will be able to catch Thunder at Download Festival, and they have now announced that they will be playing as very special guests to ZZ Top at Wembley Arena on June 24th.

‘Wonder Days’ is out on February 16th on earMUSIC.