USA AOR superstar band Toto has been announced as one of the first artists to perform at the Live At Chelsea Concert Series in 2019.

Live At Chelsea celebrates its fifth year of bringing live music to the spectacular outdoor grounds of the Royal Hospital Chelsea, home of the Chelsea Pensioners – who will see the band headline on Thursday 13th June.

Inducted into the Musicians Hall of Fame in 2009, recipients of six Grammy awards – including Best Record in 1983, they have scored international hit singles with the likes of ‘Africa’, ‘Hold The Line’, and ‘Rosanna’. The Gospel According to Luke, Lukather’s recent autobiography revealing many a story about the band.

Still featuring original members Steve Lukather (Guitars, Vocals) and Steve Porcaro (Keyboards), alongside lead vocalist Joseph Williams, the London show is part of Toto’s world tour 40 Trips Around The Sun, celebrating their own 40th anniversary alongside an album of the same name containing a selection of their best and biggest songs plus three previously unreleased tracks.

The Live At Chelsea Concert series continues to feature an eclectic range of artists from Rufus Wainwright, Simply Red, Ludovico Einaudi, Belle & Sebastian, to The Kaiser Chiefs. A portion of ticket sales from the event is donated towards the care of the Chelsea Pensioners, as well as the maintenance of the Grade I listed site that has provided care and comradeship to ex-military personnel since 1682 when it was founded by King Charles II. 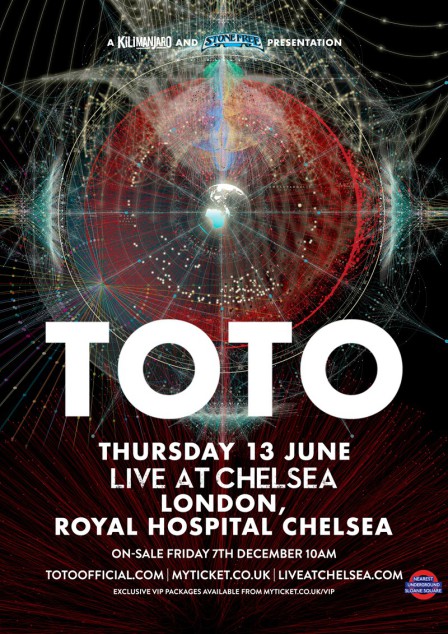