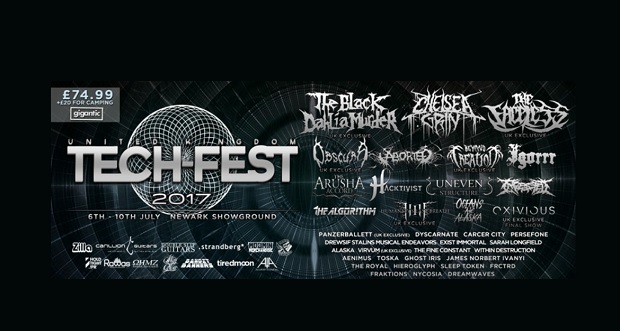 If you’re a fan of the complex and intelligent designs of technical death metal (often shortened to just “tech metal”), then no doubt there’s one festival in particular this year you’ll be keeping your eye on…and it’s right around the corner.

With a small army of sponsors (including Carillion Guitars, Strandberg and Stay Close Clothing),UK Tech-Fest returns from 6th-10th July for its sixth consecutive year, held once again at the Newark Showground in Nottingham. Featuring a killer line-up that draws acts from across the globe, the festival promises to deliver the ‘heaviest line up to date’, and with just a brief glance over the huge list of bands presented, we’re inclined to agree.

As a UK exclusive, American Melodic act The Black Dhalia Murder join Germany’s Obscura and French electro-inspired act The Algorithm, with England’s very own Hacktivist leading the charge of the British assault. Also announced are L.A. extreme metal act The Faceless and deathcore’s Chelsea Grin, who released their fourth studio album ‘Self Inflicted’ in summer 2016.

Here’s the track “American Dream”, released as a bonus track after a digital re-release of the album in January of this year.

With at least 40 additional acts lined up to perform and tickets priced at only £69.99 (plus £20 for camping), the prospect of getting kicked in the face in a moshpit for under £100 is arguably more attractive than the idea of sitting at home drinking tea with your nan.

For more information and to buy tickets for UK Tech-Fest 2017, head over to http://uktechfest.com/